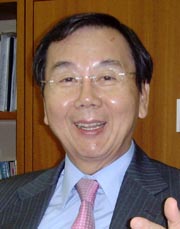 Legislation in 2007 to allow reserve savings to be used as loans to the poor provided a basis for financial institutions to set up microcredit banks, which normally makes small business loans to the disadvantaged.

There has been a debate over the feasibility of providing loans to those who have previously defaulted or have poor credit ratings because it could encourage moral hazard. However, 11 companies and financial institutions have founded microcredit banks and are now expanding their operations.

Lee Soon-dong, 63, president of Samsung Smile Microcredit Bank, worked as journalist for eight years at the JoongAng Ilbo before working for Samsung group as a public relations executive. He held several executive posts in Samsung affiliates including Samsung Electronics and Cheil Worldwide, an advertising agency.

Lee said microcredit banks are needed to help the less privileged and thus stabilize society and support the market economy. He also regards them as part of corporate social responsibility and PR activities. He stressed that large businesses need to actively participate in such programs because the government is limited in what it can do.

A. On Dec. 15, 2009, Samsung opened its first microcredit bank in Suwon - the first in the country. Samsung was one of the 11 companies and financial institutions that have started microcredit banks. Samsung had already been doing a lot of charity work for low-income households. It is only an extension of what we have been doing.

How much did Samsung contribute to the microcredit bank?

How are microcredit bank loans different from Sunshine loans?

Sunshine loans are not business loans for startups but personal loans for living expenses. Microcredit bank loans are to help merchants open up a new store or add a new facility. The loans are available only to those with credit ratings of between seven and 10, which are the lowest grades.

Some criticize that microcredit loan conditions are too strict. As of August, only 179 loans have been granted totaling 170 million won. Is it as difficult to take out regular loans?

We now have seven branches. We’ve tried very hard. We lent 170 million won for the less privileged, but this is still the largest amount among the 11 companies and financial institutions that have been running microcredit banks.

We do not set the conditions for making loans, but the central Smile Microcredit Bank does. We wanted to give loans, but there are not enough people who are qualified. There were concerns over moral hazard, but we don’t just give away loans without justification, as opposed to what the media says. The central Smile Microcredit Bank is strictly regulated by the Financial Supervisory Service. There is a limit in what to can do.

Economists said the purpose of enterprises is to make profits, but businesses have started emphasizing corporate responsibility these days. We started it as a charity project, but now it is our corporate strategy. The widening economic disparity between the rich and the poor could jeopardize the market economy. So, we do a lot of charity works for the less privileged.

In Bangladesh, the public donated money to lend to the poor, but in Korea, companies are providing the funding. Businesses should continue to make contributions.

One thing that is different is that in Korea, people are very much concerned with their reputation. They feel ashamed of borrowing money from a microcredit bank. So they are reluctant to do so.

There was a middle-aged government employee whose surname was Park. He was interviewed by a local daily newspaper. He borrowed 5 million won from Samsung Smile Microcredit Bank. He said in the interview that he had thought that he was abandoned by society but said Samsung lent him money. He was very grateful and even proud. He said he wanted to return the favor.

If we are going to lend money, we want to help those who are grateful. This may be a way of increasing our customer base.

One time we went to a slum area [when I was working at Samsung]. We met a couple and realized that they could move from the slums if we could provide facilities to take care of their children. So we built a day care center. It all started with helping the poor. The microcredit bank is another way of maintaining the market economy.

Recently, the government has recently stressed “coexistence,” and large companies have started microcredit banks. There is criticism that the companies are engaging in populism. How do you feel about those charges?

There are always people who are in need. The government cannot help them all. It has been like this regardless of time and place. It was difficult for governments and religious organizations to solve all problems. That is why volunteerism was born.

Speaking of coexistence, the government just wanted us to take part. This is also part of carrying out corporate responsibility and business strategy. What the government said is right, and we do not think it is a burden. The government took an interest in microcredit banks and wanted to do it in cooperation with us and other nongovernmental organizations. So, I do not see it as populism. The government just suggested a way in which we can make a contribution.

Large companies account for a significant portion of the Korean economy. We intend to contribute to our society in many different ways.

Are there people who already have paid back their loans?

It just began in 2009, and repayment has not started. Our loans are not based on collateral. If they cannot pay back their loans, that would be the end of it. If we want them to pay back, we need to give them motivation to make a repayment. Merchants take trust seriously. They normally don’t try to default on loans. So we provide loans to those who will work hard so that they can pay back money. The microcredit bank in Bangladesh was successful because most of the loans were paid back. It could continue to operate with the money.