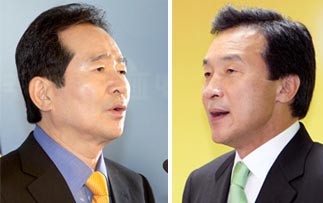 Ahead of next month’s leadership election of the Democratic Party, two former chairmen of the largest opposition party yesterday announced their bids to win the post once again.

The Democratic Party will close nominations tomorrow for the primary election to select a chairman, with nine candidates expected to compete. The official campaign will kick off nationwide Saturday, and the party’s convention will take place on Oct. 3.

He also promised to open up the party and recruit young, talented politicians to bring about a “big change” to the DP.

Chung, a four-term lawmaker, helped create the Uri Party with Roh Moo-hyun royalists in 2003 when they split from the then-ruling Democratic Party. He headed the party from 2005 until it re-merged with the Democratic Party in 2007.

In a separate press conference, Sohn Hak-kyu, former Gyeonggi governor and current adviser of the DP, said he will uphold the legacies of the two late liberal former presidents.

“I will revive the spirits of Kim Dae-jung and the values of Roh Moo-hyun to win back the six million votes lost [in the 2007 election],” Sohn said.

The remarks appeared to be targeting his rival, Chung Dong-young, who will announce his chairmanship bid today.

Sohn, former three-term lawmaker, had served as the Gyeonggi governor from 2002 to 2006 under the Grand National Party.

He, however, left the ruling party in 2007 after he dropped out of the presidential primary against President Lee Myung-bak and former GNP Chairwoman Park Geun-hye.

Months later, he joined the Democratic Party and competed in the primary to become its presidential candidate, but lost to Chung Dong-young.

The DP’s Oct. 3 convention will select the chairman as well as five senior members of the leadership.