The typhoon that just wasn’t to be

The typhoon that just wasn’t to be 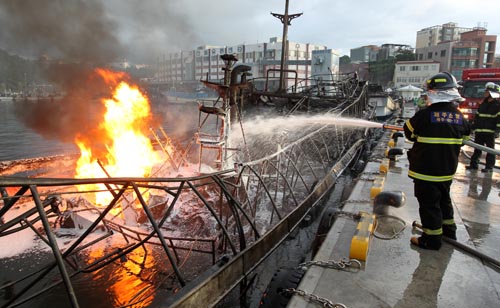 Firefighters extinguish a fire yesterday morning that engulfed nine fishing vessels anchored together to be better protected from Typhoon Malou at Seogwipo Port, Jeju Island. The origin of the fire is unknown. [YONHAP]


The Korean Peninsula was hit last week by Typhoon Kompasu - one of the biggest storms Korea has seen in several years. And just after Kompasu passed, meteorologists at the nation’s weather agency predicted another tropical cyclone - Typhoon Malou - would hit Korea yesterday.

But Malou, which was expected to hit Jeju Island, changed course and did not hit the Korean Peninsula. Instead there were clear blue skies in Seoul yesterday, following heavy rain Saturday and Sunday.

After the typhoon was thought to be headed toward the peninsula, Korea and the United States postponed a joint anti-submarine drill scheduled for last Saturday in the Yellow Sea. The drill was part of defense preparations in response to the sinking of the Cheonan in March.

The Korea Meteorological Administration said that the typhoon’s altered course was due to a change in atmospheric pressure.

At 2:33 p.m. yesterday, nine fishing vessels tied together to be better protected against the expected typhoon burned in Port Seogwipo, Jeju. The fire started in one boat and spread to the others.

Around 200 other fishing vessels were anchored at the port for protection.

At 5 a.m. yesterday, a typhoon alert issued by the National Emergency Management Agency in the eastern interior of South Jeolla in Yeosu, Gurye and Gwangyang was cancelled.

And at 1 p.m. the typhoon alert issued in South Gyeongsang and other areas were also cancelled.

The Korea Meteorological Administration predicted that although the typhoon would not hit the Korean Peninsula, strong winds and high tides would continue in the southern and eastern coast until later today.

The KMA said yesterday that the typhoon had passed the southern coast and left the Korean Peninsula via the East Sea.

As the typhoon passed, between 50-100 millimeters (2 to 4 inches) of rain fell in Tongyeong and Geoje, South Gyeongsang.