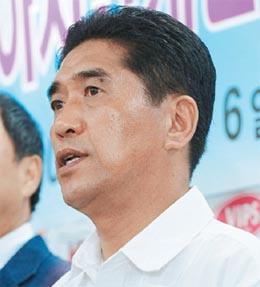 The Kia Tigers and national baseball team manager for the Asian Games, Cho Beom-hyun, assembled the best squad possible based on players who are performing well this year, the manager said.

The national baseball team’s final 24-man roster was announced on Monday and the JoongAng Ilbo spoke with manager Cho Beom-hyun about the national-team selection process prior to the KBO game between Kia and Hanhwa on Tuesday night.


Q. The technical committee meeting held to finalize the roster for the Asian Games took longer than expected. Were there some tough decisions?

A. “It did not take long for us to decide on most of the players. But we had a tough time deciding on the final two or three selections.

“We focused on assembling the best team possible. I am satisfied with the choices we made.”

Lee Bum-ho (third baseman for the SoftBank Hawks) was one of the notable names excluded from the team.

“If Lee was playing well, we would have taken him, but we heard he wasn’t in top physical condition. Choi Jung is playing well this season and we expect him to play as well as Lee. We also have a capable backup in Cho Dong-chan.”

Park Kyung-wan isn’t in very good physical condition. Why did you decide to include him on the squad?

“We need Park on our roster. In international competitions, pitchers have to face unfamiliar pitchers. Catchers often have to make calls based on the batters’ strides, movements in the on-deck circle and batting stance, among other indicators, to call games.

“In such regard, Park is very savvy behind the plate and that’s why I decided to include him on the team. I also took into consideration the fact that Park is very good at leading pitchers.”

“We don’t have many right-handed pitchers and Yoon was one of the few proven pitchers available. He’s physically O.K. but he just needs time to recover from psychological shock [after hitting several batters] so I figure he will be okay.

“[The Kia Tigers] expect Yoon to return to the lineup soon and I plan on using him in our starting rotation near the end of the season. We expect him to pitch in the starting rotation as well as out of the bullpen at the Asian Games.”

How do you plan on utilizing veteran southpaw pitcher Bong Jung-keun?

“Other than Ryu Hyun-jin, other southpaw pitchers on our squad are capable of starting and providing relief work. Yoon and Song Eun-beom are similar in that regard. Depending on our needs, these pitchers can start a game or work out of the bullpen.”

Are you allowed to make changes to your roster in case of injury?

“I heard we are free to make changes with regard to injured players.”