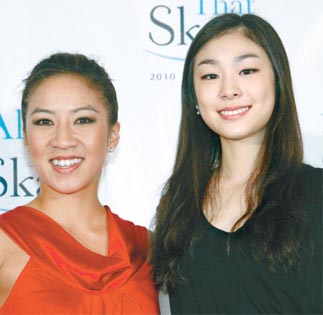 Kim Yu-na, right, of Korea, and Michelle Kwan of the U.S. pose. [AP/YONHAP]

BURBANK, California - Olympic figure skating champion Kim Yu-na is set to train in Los Angeles, although for how long and under whose tutelage remains to be seen.

Since splitting from her longtime coach Brian Orser in a public spat last month, Kim had remained coy on her plans. Kim eliminated some of the mystery on Tuesday, confirming she would be moving her training base from Canada to Artesia on the outskirts of Los Angeles.

Kim, who alongside skating great Michelle Kwan will star in an upcoming on-ice special in Los Angeles in October, did not say whether the move was a permanent one or whether it was just temporary coinciding with the show.

As for a new coach, that has yet to be determined.

``I was training for about four years in Canada, although my coach and where I’m going to be training have not been decided definitely yet,’’ Kim said. ``I’m going to make those decisions slowly and step-by-step.’’

Kim, who turned 20 on Sunday, had been training with Orser at the Toronto Cricket, Skating and Curling Club since 2006 before informing him on Aug. 2 that he would no longer be serving as her coach.

Under Orser’s guidance, Kim captured the women’s figure skating gold at the Vancouver games this year. With no coach and in search of a new training facility, Kim found an ideal landing spot at the East West Ice Palace, a rink owned and operated by Kwan’s family.

Kwan, a nine-time U.S. champion, was surprised to learn that Kim would be training at her facility and even more taken aback when she heard rumors that Kwan and her father would be coaching Kim.

Kwan won’t be Kim’s next coach but believes Kim will find the right fit soon.

``It’s going to be a transition, but she’s got a great team with people that she trusts,’’ Kwan said. ``I’m sure the final decision will be hers, but it’s going to be a time where she’ll be making a very big decision.’’

As for moving to Los Angeles, Kim is familiar with the city, having previously won the 2009 World Championships there.

``LA is a city that has given me great support for skating,’’ Kim said. ``I think I’m going to be very comfortable and I’m going to enjoy the great energy in the city.’’

Kwan and Kim, along with other noteworthy Olympic skaters, will take the ice for ``2010 All That Skate LA,’’ a two-show event that starts on Oct. 2 at Staples Center.

It marks the first time that Kwan will be performing in front of an American audience in more than four years. The duo will be joined by Johnny Weir, Tanith Belbin and Ben Agosto, among others.