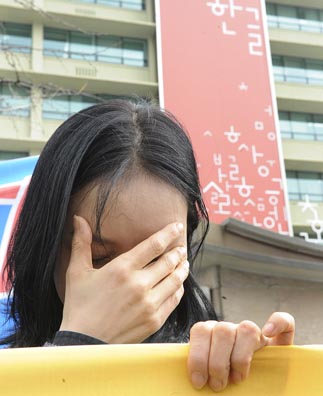 A member of the National Theater of Korea’s union cries as she explains the ongoing dispute between the union and the theater. [YONHAP]

Even though the opening performance of the almost two-month-long World Festival of National Theaters was abruptly cancelled on Tuesday, the event is still on schedule to go on, said Lim Youn-churl, president of the National Theater of Korea, at a press conference yesterday.

But until the dispute between the union and theater is resolved, future performances could be delayed or cancelled, he said.

The performance “Korea Fantasy: Soul, Sunflower,” by The National Dance Company of Korea, was cancelled on Tuesday when a dispute between the union and the management spilled out onto the stage.

Members of the union had informed the audience that they would delay the performance by 30 minutes in protest against the theater’s new policy. Lim started the performance on time with actors from outside the union, but it was canceled 11 minutes later when it was clear the show could not go on.

There were about 600 people in attendance, and all received a refund worth 110 percent of the original ticket price, along with 10,000 won to cover transportation costs.

The dispute arose when the NTK decided on a new wage system, under which 30 percent of an actor’s salary would be based on performance evaluations by the management. Union members want that number decreased to 10 percent.

Until the dispute is settled, labor union actors will continue to protest by delaying performances, said Cho Young-gyu, the union’s acting chairman, at a press conference yesterday following the one given by Lim.

“We have the right to a better work environment and we hope audiences will understand,” Cho said

Lim said he would continue negotiations, but that if the union continues its actions he would ask the Culture Ministry to intervene.