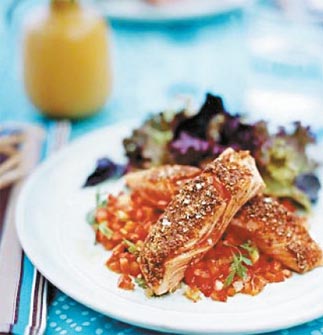 The Grand Intercontinental Hotel hosts a Chilean food festival this week. Provided by the hotel

There’s an array of international dining options in Seoul, but it isn’t easy to find restaurants serving true Chilean cuisine.

The 2010 Chile Cooking Festival Week is out to change that.

The six-day event, which started Monday and ends Saturday, offers a range of hearty dishes that make up the best of Chilean cuisine.

It was organized by the Trade Promotion Office of Chile, or Prochile, and is being hosted by the Marco Polo restaurant at the five-star Grand Intercontinental Hotel, located in Samseong-dong, southern Seoul.

“The 2010 Chile Cooking Festival Week will contribute a great deal to increasing awareness of Chilean food and wine in Korea,” a press release for the festival said.

World-renowned Chilean chef Pilar Rodriguez has been invited to the event to serve as the head chef. She will bring her expertise in creating of a diverse menu of special dishes representing her country.

Before Rodriguez became a chef, she worked for Tommy Hilfiger USA as a marketing director for Latin America and the Caribbean for nearly 10 years.

Later, however, she realized that her creativity was best expressed in the kitchen and not the office, so she changed careers.

She attended Le Cordon Bleu, the prestigious school of culinary arts in Paris and has since become a respected chef on both the local and international scene.

She is now known as “a true culinary ambassador of Chile” and was named Chile’s Best Chef by Placeres, a popular magazine in Chile. Rodriguez said she is eager to contribute to the development of her country through her work.

Although most people conjure up thoughts of wine or pork when they think of Chile, the country is also known for its marine products, which will figure into Rodriguez’ menus.

Products from one of Chile’s most famous wineries, which has been specially selected for the event, will also be highlighted.