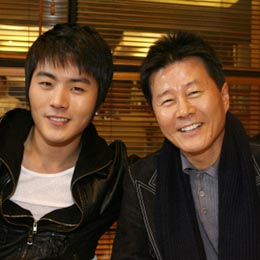 The war of words between songwriter Choi Hee-jin, her ex-boyfriend, singer Eru, and his father Tae Jin-ah, appears to have ended with an apology from Choi.

In a press conference Tuesday night, Choi apologized to Eru and Tae for her behavior and asked for their forgiveness.

On Friday, Choi wrote on her Cyworld page that Tae had forced her to have an abortion and demanded that he “give the baby back.” She added: “You don’t have to kill someone to be a murderer.”

The post was soon erased, which lead to speculation that Choi’s claims may not have been true.

She also told the media that she had taken poison, but she was later diagnosed with fatigue and stress due to lack of food.

On Saturday, Tae refuted Choi’s claims on an SBS talk show, saying, “We are not only unable to confirm the pregnancy, but even if it were true, there is no certainty about who the father is.”

Tae also repeated the allegation that Choi had attempted to blackmail him for 100 million won, saying that he was ready to go to court to prove his claims.

The very public quarrel between the two flared up last month with Choi demanding an apology from Tae for what she said were threats of violence if she did not end her relationship with Eru. Tae has denied having anything to do with the breakup.