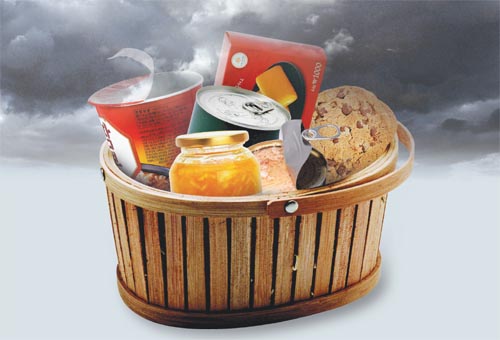 A mix of doubt and confusion washed over Kim Ji-hye’s face as she went back and forth on two different powdered milk products at E-Mart in Yangjae-dong, southern Seoul, on a recent Saturday.

To Kim, a 28-year-old mother of a baby girl, this discount store might as well have been in a foreign country.

“Whenever I go grocery shopping these days, I feel confused, as if I’m being lied to,” Kim said as she squinted to read the food labeling on the back of a Maeil brand of powdered milk. “I don’t know which products are safe, especially for my baby, and I don’t trust anything that the food companies are saying.”

According to recent reports on food safety, Kim’s unease is more than justified.

Last month, the Korea Food and Drug Administration announced that there were 4,217 reported cases of foreign substances found in processed food in just the first half of the year. This is a whopping six times more than what was reported in the first six months of last year.

On average, more than 1,000 cases involving foreign substances in processed food are reported in a year. Experts warn, however, that if you include unreported cases, the number could double or even triple.

“The big jump this year is mainly due to our new, compulsory measure for food manufacturers in which they are required to report any cases of foreign substances found during production,” said an employee at the KFDA who asked to remain anonymous. 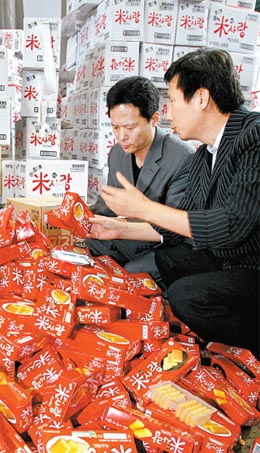 Shopkeepers in Seoul collect products that were found to contain melamine in 2008. [JoongAng Ilbo]

This measure requires food manufacturers to report to the KFDA any cases of foreign substances found during and after processing. The regulation was set up so that the KFDA could trace any food safety problems at an early stage, making it easier to get to the root of the problem.

According to the agency, Korea is the only country in the world that makes it mandatory for food companies to voluntarily report such cases.

“Even though Korea’s food-related regulations are as tough as other developed regions, including Europe and the United States, consumer confidence in food safety is less than 40 percent, far behind that of other countries,” said the KFDA employee. “The lack of consumer trust in processed food, in many ways, stems from the heated media coverage on some shocking processed-food cases in the last few years.”

On the other hand, Lim Gi-sub, vice chairman of the Korea Food Safety Association, suggested consumers are simply smarter about what they eat.

The increase in public distrust of food has more to do with a rise in the public’s awareness and nutrition knowledge, Lim said, as they try to keep up with more advanced and systematized food manufacturing processes.

He pointed out the paradoxical nature of “systemized food manufacturing”: even though raw food materials are safer now than ever because of technologies like refrigeration and pasteurization, more food products are being recalled and news reports of contaminations are more frequent.

“During the 1960s and 1970s, the question of whether food was safe or not didn’t really concern the Korean public,” Lim said. “Back then, everybody was too hungry to care about the safety of what they put in their mouths. Along with the economic development of the country, Koreans are now extremely conscious of the quality of life they lead and this includes the quality of food they consume - hence the ‘well-being’ and organic trends that have become enormous here.”

The KFDA report comes on the heels of a controversial case involving an allegation that a dead mouse was found inside a package of E-Mart-brand bread crumbs, which pitted the KFDA against E-Mart and Samyang Milmax, the product manufacturer.

In April, a housewife reported to the E-Mart branch near her home in Osan, Gyeonggi, that she found a 6-centimeter-long (2.36 inch) mouse in the pack of bread crumbs she had bought at the store.

In July, the Seoul Central District Prosecutors’ Office dismissed charges made against both Samyang Milmax and the housewife, who was accused of staging the scheme. Prosecutors stated that there was insufficient evidence for either allegation. And even after the ruling, the KFDA gave no formal apology to Samyang regarding its earlier, unproven allegations.

After a month-long investigation, the KFDA, the food company and prosecutors were unable to identify the exact source of the problem. In the end, after numerous media reports about the controversy, the public was back to square one.

A similarly puzzling incident occurred in March 2008 when a customer reported she had found a mouse head inside a package of Saeukkang, or shrimp crackers, made by Nongshim. At first, Nongshim and the KFDA said that the most likely scenario is that the mouse head ended up inside the package during processing in a Chinese plant in Qingdao, China, where raw materials for the crackers are made. However, the Chinese factory strongly denied the allegation and showed proof that its health and sanitation conditions were up to par.

The incident slowly faded from public interest, without any answer to where the mouse head really came from.

Meanwhile, Nongshim, Korea’s leading processed food company, saw its revenue plummet. After revenue for the shrimp crackers fell 30 percent on average in just a few months, chairman Sun Wook had to repeatedly apologize to the public, even though he did not really know the root of the problem.

In many recent safety cases involving processed food, by the time an inspection team is dispatched - whether it is from the KFDA or the company itself - it is already too late to find the exact source of the problem. There are also not enough food inspectors to match the total number of food-related incidents.

“The U.S. is ahead of the game, in which food inspection is privatized,” said Chung Kee-hey, director of the health promotion research division at the Korea Institute for Health and Social Affairs.

Besides the lack of inspectors available, local experts point to the complexity of modern food manufacturing processes - from farming and flavoring to processing and packaging - as a reason for the mixed messages that the public receives on who to blame for food-related incidents.

Chung said that compared to the past when food safety issues tended to be accidental, today they can be intentional, such as when manufacturers or suppliers try to take shortcuts in complex food manufacturing processes to make an extra dollar. 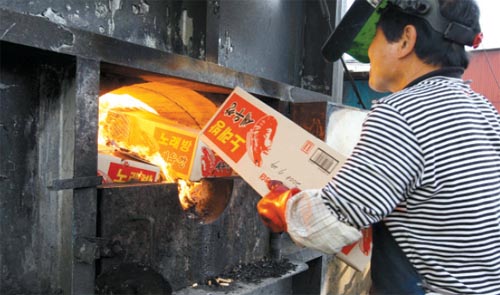 Boxes of Nongshim’s Saeukkang, or shrimp crackers, are incinerated at the company’s factory in Busan in 2008. By Song Bong-geun


Imports and the “China scare”

The country-of-origin label Koreans tend to fear most is “Made in China.”

The melamine incident in 2008, in which Chinese-made powdered milk products were found to contain dangerous doses of melamine - a banned substance in food - left an even bigger trail of doubt for Koreans concerning Chinese imports.

The contamination spread around the world. In Korea, the KFDA analyzed 400 products containing Chinese-made ingredients and discovered that almost half contained melamine.

“I remember being terrified after that news hit,” said Lee Eun-su, 37, whose daughter was an infant at the time. “I try to avoid any China-made items in general. But for Korean products that contain Chinese raw materials, it is harder to spot the origin on food labels, which scares me a lot.”

Over the past few years, all manner of Chinese imports, like kimchi, chili powder and beef broth, have all been found by Korean inspectors to be contaminated with unhealthy levels of bacteria, inedible chemicals and artificial food coloring.

Lim said that even though Korea has fairly strict import safety regulations, the sheer vastness of Chinese-made materials and products imported to Korea makes it impossible to spot all the illegalities.

“For Chinese food products, the government conducts at least three thorough examinations,” Lim said. “After being judged as safe or unsafe, the products go through another round of random sampling. Still, many companies manage to sidestep these exams and include harmful ingredients.

“The simple fact is that companies in Korea and other countries depend on Chinese factories for an abundance of cheap raw materials they can use to lower production costs and raw-material fees.”


Is “well-being” and organic food safe?

In February, the “well-being” chocolate bars from the food giant were found to contain more than the acceptable amount of bacteria by the KFDA - around 10,000 bacteria per gram. The company recalled more than 2,000 boxes of the product.

Market O vice president Noh Hee-yeong said at the time of the product’s launch that it contained absolutely no artificial additives that are allowed in regular chocolate cookies and that this was the reason that the product was about two to three times more expensive than other chocolate cookies.

Similarly, this June, Dongsuh Food’s “Pumpkin Flake” cereal was found to include E. coli bacteria by the KFDA.

“Consumers have to be especially careful when selecting processed food products that contain little or no additives or preservatives because without them, the expiration date is shorter and there is a greater risk of bacteria being formed,” said Chung.

Deception is also an issue.

Last month, blueberry concentrate made by a local consignment company was found to be grape juice. The concentrate was the main ingredient in blueberry health drinks sold by major food companies, including Boryung Company.

With the fast expansion of the food manufacturing market, consumers may as well brace themselves for more food safety accidents, according to Park Joong-gon, author of “Throw Down Your Table,” a book about food safety in Korea.

“There are some good food safety regulations, including the HACCP [Hazard Analysis Critical Control Point] and GAP [Good Agricultural Practice] that are conducted on a national scale,” Park said. “Unfortunately, reality is harsher than government reports or regulations can handle.”

“Consumers need to be more proactive,” Park said. “For example, creating community-supported agriculture programs like they do in the United Kingdom puts consumers at the forefront in regulating the standard of food that go into their bodies. With more awareness and activism comes knowledge, and in this case, safety.”