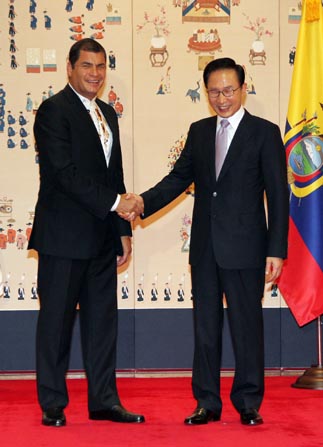 The Ecuadorean president arrived in Korea yesterday and he will leave tomorrow.

In a meeting at the Blue House, energy cooperation efforts between the two countries were discussed in detail. “The Ecuadorean president showed keen interest in learning from Korea about economic growth and expressed his hope that Korean businesses would venture into such core areas of Ecuador’s national development projects as energy, resources and infrastructure,” the Blue House said.

According to Lee’s office, the president promised the cooperation of the Korean government and private sectors. “In this connection, Lee called upon his Ecuadorean counterpart to provide active support for Korean corporations to participate, particularly in building energy infrastructure, oil-refinery facilities and developing energy and mineral resources.”

Ecuador, along with Venezuela, is one of the major oil producers in Latin America. The state oil companies of the two countries have launched a plan to build a refinery and petrochemical complex in Manabi, Ecuador. Korean companies, including the nation’s largest refiner SK Energy, are competing against Japanese firms to build the project. If the Korean firms win, it will become the nation’s largest overseas refinery construction project.

Correa, according to the Blue House, asked the Korean government to support the country’s “sustainable socioeconomic” development. Lee promised to increase loans and grants for bilateral economic cooperation in the fields of solar photovoltaic and wind power generation, the Blue House said.

During their meeting, Lee and Correa also witnessed the signing of two bilateral cooperation agreements. One was on the export of Korea’s electronic customs clearance system and the other was an agreement on cooperation between Korea’s Ministry of Knowledge Economy and Ecuador’s Ministry of Electricity and Renewable Energy.