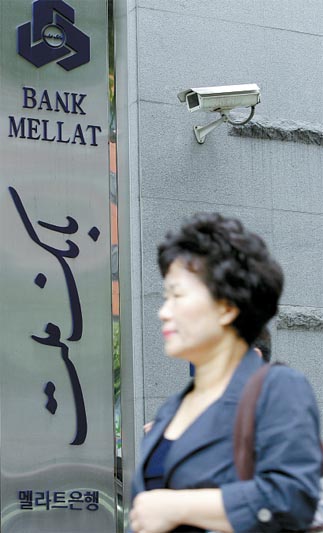 A woman passes a signboard at Iran’s Bank Mellat branch in Seoul yesterday. Korea said it would penalize the bank for its nuclear program and violating laws on foreign exchange transactions. [Yonhap]

The Korean government slapped tough sanctions on Iran for its nuclear program, and the penalties included the suspension of virtually all financial activities at the Seoul branch of Iran’s Bank Mellat.

The government reiterated that its action complies with United Nations Security Council resolutions. It said its sanctions were similar to those applied by the European Union, Japan and Australia.

However, it said that transactions that are not directly related to or supportive of Iran’s nuclear program will be allowed and oil imports will continue. It also said it would suggest the central bank of Iran to open a won account to allow financial transactions that finance trade between the two nations. Trading with Iran involving transactions in yen or the euro could be strangled by the international sanctions.

“As a country facing a nuclear threat from North Korea, we need to take the lead in taking part in international sanctions against Iran’s nuclear development,” Vice Finance Minister Yim Jong-yong told the media.

In describing the sanctions, Yim was careful not to offend Iran. When asked if the sanctions are as stringent as Washington requested, Yim said, “This is to comply with the UN Security Council resolutions, not with U.S. requests.”

The government blacklisted 102 Iranian institutions, including Tehran-based Bank Mellat and 14 other banks and 24 individuals suspected of involvement in Iranian nuclear development. The Financial Supervisory Service said Bank Mellat has processed hundreds of millions of dollars in transactions for Iranian nuclear, missile and defense entities and violated the Korean law by not seeking approval for transactions with institutions or companies blacklisted by the U.S.

Yim said Bank Mellat’s Seoul branch has mostly dealt with foreign exchange transactions and will not be able to operate at all. He said, however, the sanctions do not include the freezing of the bank’s assets because there is no legal basis in Korea to do so. The sanctions also prohibit any new investments in petroleum resources, gas development and related construction contracts.

Transactions with individuals or entities not related to Iran’s nuclear program are allowed but will require government approval. All financial transactions over 40,000 euros ($50,716) will need state permission and those over 10,000 euros will need to be reported.

The government also announced measures to support trade between the two countries, which has declined after Korean companies became worried about carrying out financial transactions with Iranian entities. Iran is Korea’s fourth-largest supplier of crude oil, according to the state-run Korea National Oil Corp,, and it’s the largest export market in the Middle East. Korea imported $5.7 billion of Iranian goods last year, while exporting $4 billion, 1.1 percent of the country’s total exports, according to the Korea International Trade Association.

“Oil imports will not be affected,” Yim said. “Other countries continue to import crude oil from Iran and oil exports by Iran are not included in the UN resolutions.”

To protect legitimate trades and financial transactions between the two nations, the government said it would request the central bank of Iran to open a won-denominated account at a local commercial bank. The Iranian central bank will be able to receive proceeds from Iran’s oil exports and pay Korean exporters with the money. According to Yim, 70 percent of Korea’s small and medium-sized exporters to Iran have used Bank Mellat.