Playing it rough to be winners

Playing it rough to be winners 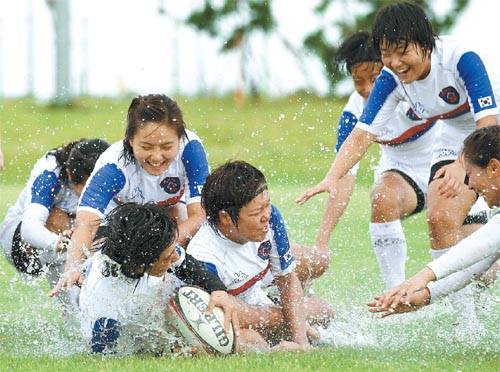 Members of the national women’s rugby team participate in a recent team practice in Incheon. By Kim Min-gyu


Eleven women are training in the rough-and-tough sport of rugby with one goal in mind: to win one game at the 2010 Guangzhou Asian Games in November.

The members of the inexperienced and underfunded women’s national rugby team come from all walks of life, from a former radio producer to a student at a girl’s high school. Most members of the squad have less than three months experience in the sport but are proud to be the nation’s first.

Nine out of 11 members on the squad are newcomers to rugby. The most senior member of the team is 26-year-old Min Kyung-jin, a former radio producer for English radio TBS eFM. She was with the station since the station was founded in 2008 but quit her job late last year. Having come across an advertisement seeking potential national team members in June, Min put a halt to the freelance work she was doing and joined the team.

Having grown up in the United States since elementary school, she got introduced to the sport while a junior in college.

“I’ve always been attracted to physical sports,” Min said. “I tried judo and mixed martial arts but it wasn’t for me. Rugby is not only a physical sport but it also requires teamwork, making it the best sport out there.”

Team captain Lee Min-hee, 23, said her love for the sport resulted in her going overseas to get a taste of competitive rugby. Having graduated from Hanyang University’s physical education department last August, she played in the Hong Kong Women’s Rugby League for two months late last year. Lee first became interested in the sport after reading about an expat women’s rugby club in Korea and it didn’t take long for her to fall in love with the sport. To be a part of the national team, Lee quit her job as a physical trainer at a fitness center.

“I’m in no position to walk away from a job but I could not give up on the opportunity to be a member of the national rugby team,” said Lee.

The other nine players have next to no experience. Chae Sung-eun is the youngest member of the team at 17-years-old. She was a member of her high school fencing team until recently, but having played football since the first year of middle school, she found fencing to be boring.

“I ended up quitting football because my parents were opposed to it,” Chae said. “But my mother informed me about a women’s national rugby team. I think she took pity on me as I was struggling to adapt to fencing.

“I got started in [rugby] not knowing anything about it but now I’m having fun.”

The Korean Rugby Union sought potential players from national fencing, handball and field hockey teams, among others, in the past year. But with no collegiate programs or semiprofessional league, it was difficult to attract elite athletes to commit to a career change.

A team was finally formed in June 2010. Having practiced together for a month, the team was entered in the Asian Rugby Championship. As expected, the results were disastrous. The team lost all four of their matches. But the team managed to score on their first try in their final group stage match against India.

“Our goal at the Asian Games is to win one match,” said team manager Moon Young-chan. “We’re an underfunded team that can’t even train with other national teams at the National Training Center, but we have an unrivaled passion for what we do.

“If we start up collegiate programs and a semipro league and develop the sport over the long-term, we can become as competitive as the football and handball squads.”