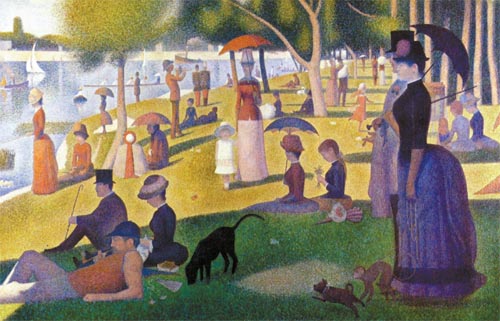 ‘A Sunday Afternoon on the Island of La Grande Jatte’ (1884) by Georges-Pierre Seurat, oil on canvas, Art Institute of Chicago


Many paintings by the French artist Claude Monet (1840-1926) have titles that include the name “Argenteuil,” a village on the outskirts of Paris where the city’s suburbs are today. The village was once a popular weekend destination for Parisians, and Monet lived there for eight years from 1871 to 1878.

One painting from this period, “The Railway Bridge in Argenteuil,” depicts a railway bridge stretching over a light-blue river, on which two small boats with white sails leisurely float. The picture also shows a train passing over the bridge, sending white puffs of smoke upward to mix with the clouds drifting across the sky.

What’s amazing about this picture is the inclusion of the concrete bridge and the train carelessly emitting smoke in the peaceful countryside. Did Monet add these things to criticize the phenomenon of modernization? Some critics interpret the painting this way. But many others, including Christoph Heinrich, disagree, saying that it reflects the artist’s admiration for modern civilization.

In France in the late-19th century, as labor conditions improved and railroads connecting Paris and its suburbs were built, the train became a popular form of transportation, enabling Parisians to get out of the city to enjoy the bucolic countryside. Members of the working class could even afford to go to the suburbs on a Sunday afternoon. Of course, this raised conflicts between the classes. 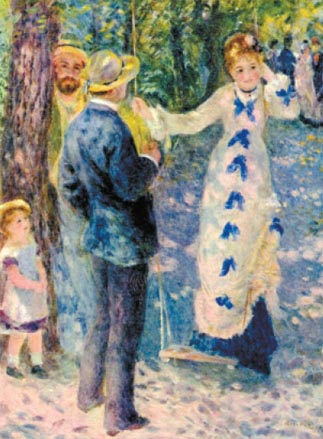 With the middle and working class going out to the country for leisure, some saw the possibility of a new Arcadia. But others, who considered the world before the Industrial Revolution to have been a utopia, were not as enthusiastic about the changes. They longed for the time when farmers worked in peace - with no distinction between work and leisure - and complained that the countryside was becoming a playground for urbanites.

Regardless of which side of the debate one stood, these scenes of “modern life” - of picnics, dances and other leisure activities - and the allure of the natural unblemished landscape of the countryside continued to draw people from many classes.

The scene also attracted the attention of Impressionist artists such as Monet, whose paintings depict those leisurely days. Even poor artists trying to make a living in the city could afford go out to the country with easels and palettes in hand.

But beyond their artistic and historic value, these works are also a testament to the chemical advances made in the modern era.

Impressionist paintings, especially those by Monet, are characterized by their vivid depictions of the ever-changing quality of light and air before the artists’ eyes. To capture these images, they needed to be in constant contact with the light and air. They needed to be outdoors. But neither Monet nor his contemporaries could have painted outdoors if tube paint had not been invented in 1841.

Before the invention of the paint tube, artists needed to grind each pigment and store it in a leather receptacle, so it was too difficult to carry all of the colors outside the studio. Even though there were many artists making sketches in the open air with pencils or chalk, there were few artists working in oil who were going outside to paint.

“Without tubes of paint, there would have been no Impressionism,” Jean Renoir, a French film director and the son of Impressionist painter Pierre-Auguste Renoir (1841-1919), once said. 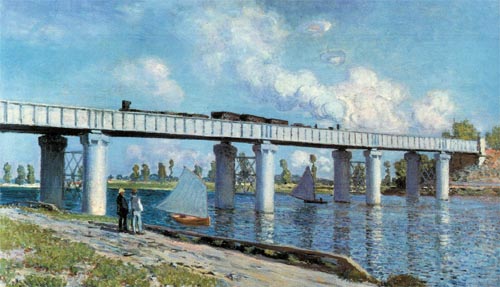 ‘The Railway Bridge at Argenteuil’ (1873) by Claude Monet, oil on canvas, private collection


With paint tubes, Monet was able to go to the port of Le Havre in 1873 to paint his famous “Impression, Sunrise.” The rest is history. Upon seeing this picture of boats as the sun rises - and painted with only a few loose brush strokes - French art critic Louis Leroy wrote in his review for the French newspaper Le Charivari: “A preliminary drawing for a wallpaper pattern is more finished than this seascape.”

He labeled Monet’s movement “Impressionism,” as the painter showed no complete images in his painting, only impressions.

Although Leroy’s intent had been to satirize the work, Monet and his contemporaries later accepted, and even embraced it.

So, not only did modernization bring about changes in society, it also changed the way artists worked and gave birth to a new art form.

But it is not clear how Monet himself felt about the changes, just as the interpretations of The Railway Bridge at Argenteuil differ depending on which side of the modernization debate one was on.

The painter who clearly admired the modern lifestyle was Renoir.

His painting “The Swing” (“La Balancoire,” 1876) shows the simple pleasure of young Parisians as they enjoy their leisure time at a park on Montmartre. Sunlight passes through the foliage and the shadows dot the clothes of the people and the ground.

The painting also annoyed Leroy, who said that the woman’s dress seemed to be stained with oil spots. But her white dress, speckled with light and shadow, evokes in viewers memories of being under a patch of trees on a sunny day, making it easy for us to identify with the carefree people in the painting.

Perhaps one of the most well-known paintings of city folk taking time out in the suburbs is “A Sunday Afternoon on the Island of La Grande Jatte” by Georges-Pierre Seurat (1859-1891). In this large-scale painting, which is 3 meters wide, men and women of various ages and classes picnic on the Parisian island in the Seine River, a retreat far away from the central part of the city.

The painting is known to be much more impressive when seen in person than in prints or in books. In person, the entire surface of the painting shimmers in light. The effect was created by the juxtaposition of dots of color that converge to create an optical illusion.

Impressionist artists senior to Seurat also used the technique of juxtaposing strokes of color instead of mixing colors together. But Seurat took it one step further in a technique known as pointillism, which was made possible because of developments in chemistry at the time and Seurat’s interest in it. Seurat’s works and those who became his followers would later be called neo-impressionists, a term coined in 1886 by another French art critic named Felix Feneon.