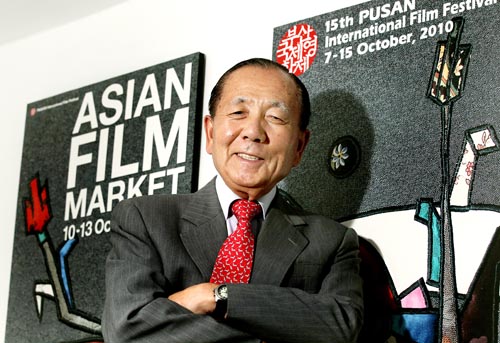 Kim Dong-ho, a founding director of the Pusan International Film Festival and credited with changing the Korean film industry, will step down after this year’s festival. By Choi Seung-sik


He is neither a filmmaker nor an actor but he is often surrounded by people asking for his autograph when he goes out.

He is admired by some of the best people working in the industry, including veteran director Im Kwon-taek, actor Ahn Sung-ki and actress Kang Soo-yeon, who have said they are fans.

The man who inspires such respect and adulation is 73-year-old Kim Dong-ho. He helped to launch the Pusan International Film Festival in 1996 and went on to develop it into the biggest film festival in the nation.

On Tuesday, Kim announced that he will step down as director at the end of this year’s festival.

“I believe it is the right time for me to leave,” Kim said at a press conference in Busan. “I think I’ve done all the things I can do for PIFF over the years. I feel proud that PIFF has become a major film festival recognized by people in the international film industry.”

But realizing the idea of an international film festival in the southern port city of Busan wasn’t easy, he said.

“Everyone told me I couldn’t do anything in Busan because it is a culturally barren city,” Kim said.

But Kim proved them wrong.

The inaugural PIFF hit the jackpot with 180,000 visitors.

The festival went on to become the most successful international film festivals in Korea, bringing in about 50 billion won ($45.4 million) to the city every year.

It also sparked a cinematic revolution in Korea, with more than 70 film festivals sprouting up around the nation in hopes of building on its success.

“We had a clear goal and all of the founding members had an eye for film,” Kim said when asked how he had pulled it all together. “And we let the audiences judge the films. Our strategy worked and PIFF grew.”

“Of the 130 films screened during last year’s festival, there were 40 world premiers, meaning that the programmers did a good job of finding talented Asian filmmakers,” he said. “For that reason, PIFF should stick to the spirit under which it was founded and keep nurturing young talented Asian directors.”

Before Kim helped start PIFF, he worked for 30 years as a public official, once serving as a vice minister at the culture ministry.

Those days represent the first chapter of his working life. His 15 years with PIFF, are the second, he says.

Now it is time for a new chapter.

“I’ve spent so much of my time drinking [in the course of doing business] over the past 50 years, that I’ve always wanted time to do things for myself,” he said.

One famous anecdote has it that Kim spent many nights clinking glasses with the big wigs who work for renowned international film festivals such as Cannes, Berlin and Rotterdam to get them to support PIFF.

Now he has other aspirations.

“After I retire, I want to make my own films and learn how to use a camera,” he said. “But as someone who loves Busan and Korean film, I’ll always be there if PIFF needs me,” he said.

Kim is also an amateur photographer. An exhibition of his work will appear during the nine-day festival, which kicks off on Oct. 7.