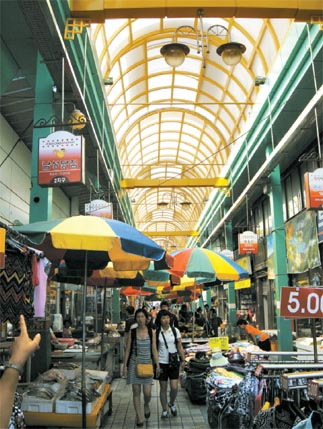 Walk into the Punggi Ginseng Market and it might feel as though you’ve entered a hospital ward.

Before arriving at the market in Yeongju, North Gyeongsang, expectations of this traditional ginseng merchant center - one of the oldest in the country - involve abundant color, lively chaos and row after row of traditional products that you could never find in the city.

Instead, stark white walls covering identical-looking stalls inside the market hint at a disturbingly institutionalized, sterile image of something that is miles away from the concept of a regional and traditional market.

Almost all of the market’s 50 booths sell the exact same products, including ginseng roots, ginseng extract, tea and candy. The price for ginseng by the gram is the same as well.

But the mundaneness doesn’t seem to pose any problems for the ginseng merchants.

In fact, it’s all part of the plan. 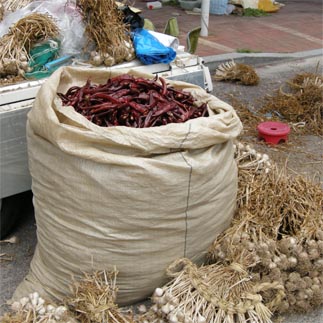 A bag of dried red peppers and garlic waits to be sold.

For merchants at traditional markets, day-to-day survival has become a lot more competitive. The modern Korean consumer is more likely to seek out corporate supermarkets, which have increasingly encroached on traditional markets’ territory. You can even get ginseng at online shopping malls and in some convenience stores. The global financial market has also taken a bite out of traditional markets’ revenue, with less money trickling down.

To cope, many traditional markets have attempted to modernize. Infrastructure has been updated, services have been added and in some cases, more products are offered.

“The Punggi Ginseng Market used to be a regular, outdoor market,” said Jeon Ok-hee, 59, head of the merchants in the market. “But in 1990, it underwent a renovation and the merchants now sell more hygienic, packaged products inside this building.

“It is much more convenient for us to operate a business because we are more sheltered now than when it was an unruly, outdoor market.” 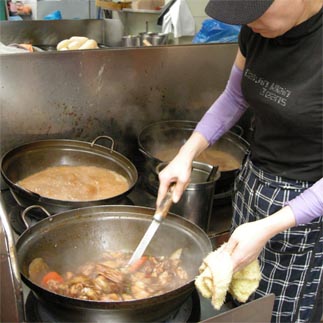 A merchant makes jjimdak, a regional speciality, at the Andong Traditional Market. By Cho Jae-eun

Along with the Punggi Ginseng Market, many of the 1,550 traditional markets around the country have gone through similar renovations during the past decade.

Leading the effort to transform Korea’s regional markets are the Ministry of Culture, Sports and Tourism and the Korea Federation of Small and Medium Business, or Kbiz. The two collaborated to launch a project to transform traditional markets into more than just retail spaces and is trying to add “culture” to the mix.

The project is called Culture-Tourism Markets, and it was launched in 2008 with initiatives for 18 traditional markets in Korea worth up to 20 billion won ($17.1 million). Both the government and private sector are investing in each market, and the Agency for Traditional Market Administration, under Kbiz, is handling the actual execution of the projects.

As part of the mass-makeovers, markets introduced cultural programs like merchant theater groups that perform inside the markets. In addition to remodeling the exterior and interior of the markets, famous regional tourist attractions have been specially branded and connect to the markets.

Meing Cheol-young, market management director at the Agency for Traditional Market Administration, said that merchants now understand that selling items isn’t the only way to have success.

“Until about a couple of years ago, local markets were interested only in one thing - straight out, selling products,” Meing said. “But merchants are starting to realize that it takes more than just products to survive in this highly competitive financial environment,” 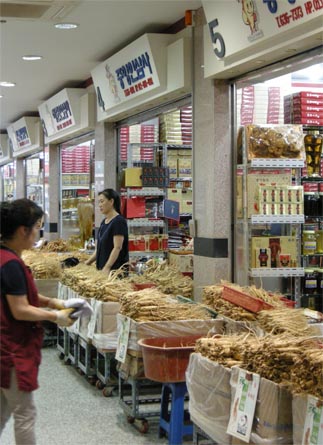 A merchant waits for customers at Punggi Ginseng Market. By Cho Jae-eun

Not all markets are jumping on the modernization bandwagon.

At the five day market, an outdoor market system in Korea in which merchants open markets to customers once every five days, the old-fashioned image of traditional markets is still alive.

As soon as I walked into the five day market, the merchants, mostly women in their 60s and 70s, motioned to come into their booths and shouted, “Come in agassi [young woman in Korean]. I’ll give you a great bargain,” their hands flailing with cloves of garlic or green peppers.

With only rainbow-colored parasols shielding them from the brutal heat of the afternoon, the merchants act free of inhibition.

The market is in the form of a narrow alleyway, with the rainbow parasols lined up on each side. The products sold are a hodgepodge of things found in flea markets, as well as fresh produce that merchants either grow themselves or pick from the mountains.

“I’ve been selling produce and grains in five day markets for most of my adult life,” said Suh Sok-ja, 70, who sells a variety of rice, barley and other grains in a small corner of the market. “Every week, I go from one five day market to another in North Gyeongsang and sell my stuff.”

Shin Jae-gi, 54, head of the Andong Traditional Market merchant association, said that after the market was remodeled in 2007 it gained many new customers.

“After the renovation, we stepped up our game and even provided merchants with service education classes. In global times, we’ve got to meet global standards,” said Shin, standing in his butcher shop at the market selling premium hanwoo, or Korean beef.

He added that after the nearby Andong Hahoe Folk Village was designated a Unesco World Heritage site this year, sales for many stores in the market went up 20 to 30 percent.

“We didn’t have a lot of foreign tourists in the past,” Shin said. “But this year we see group after group of foreigners - particularly a lot of Japanese tourists.”

Shin said the current trend in Korea of roofing markets is quite different to what is happening in Japan, where roofs are being torn down.

“By removing the roofs, the Japanese markets aim to create more of an authentic, traditional feel,” he said.

There is a lot to learn from Japanese markets, Shin said, in that they are more consumer friendly - from everything to packaging, coupon systems and service - and Korea still trails behind.

The government is doing its part by pouring millions of dollars into traditional markets. This Tuesday, Minister of Knowledge Econnomy Choi Kyung-hwan signed an agreement with market merchant representatives to purchase 13 billion won worth of gift certificates that can be used in traditional markets around the country.

The measure is an attempt to breathe some life into traditional markets, most of which have seen fewer customers in recent years.

Shin stressed that a special permit system is needed to protect older markets from corporate-run supermarkets that open nearby.

“The traditional market sector is still very small-scale and poor,” Shin said. “With the global economic crisis, we as a sector have been effected tremendously. Many of us are looking for our own ways to survive, including going online or seeking media coverage.” 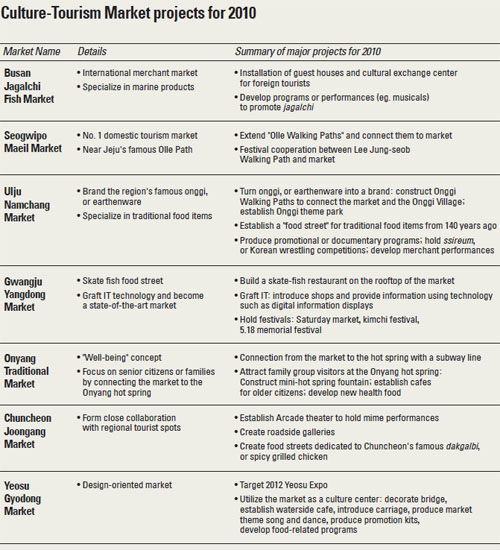