A pizzaiolo by day, an astronomer by night

A pizzaiolo by day, an astronomer by night 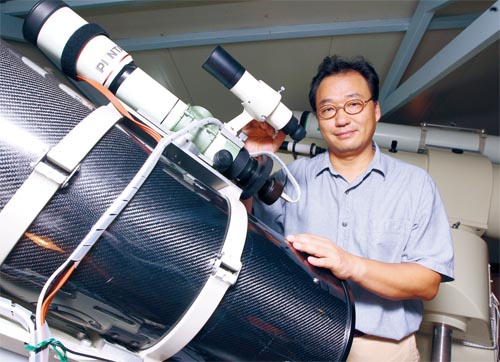 ASAN, South Chungcheong - To support his wife and three daughters, Hwang In-jun earns a living by working at a pizzeria. Being self-employed allows him to manage his time fairly freely.

But this is no normal pizzaiolo.

By day, Hwang manages a pizzeria here in this South Chungcheong city, by night he hits the observatory as soon as the sun sets.

The 45-year-old introduced himself as a “photographer of celestial bodies.”

By worldly standards, Hwang is considered very successful, having received a Bachelor of Arts in Business Administration from Kinki University in Japan, and an M.B.A. from Lincoln University in the United States. In fact, despite having worked at SK Engineering and Construction, spending time as vice-president of an online education venture corporation and working as a president at a computer company, Hwang said his true calling lay elsewhere.

He read science cartoons and magazines as a child and Hwang harbored passion for stargazing. As a high school student, he began stargazing with a telescope that his father bought him.

But a tough reality forced him to give up his dream for a time.

While buried under a hectic workload, he returned to stargazing when an old friend presented him with an equatorial telescope. With six amateur astronomers, he bought land in Gangwon to build the Nada Observatory. But being the CEO of a venture firm and stargazer at the same time proved difficult.

Then he began his new life. Two years later, Hwang built his own observatory, naming it “Hobim,” a combination of his wife’s and children’s names. Because of the high costs of owning an observatory, Hwang has yet to buy a house of his own.

“People think I’m incredibly rich because I built an observatory and buy telescopes,” he said. “That’s not the truth at all. I invest in my passion even though I’m not financially well-off.”

Stargazing has already become more than a hobby in the usual sense.

Five years ago Hwang developed an equatorial mount - the core part of an astronomical telescope - with Korea Advanced Institute of Science and Technology professor Oh Joon-ho.

This is nothing like your typical domed roofed observatory.

Near the foot of Gwangdeok Mountain sits a one-story storage-like building made of sandwich panels.

To stargazers, Hobim Observatory is well-known. The observatory brandishes a mirror stereoscope 14 inches in diameter, and eight astronomical telescopes of varied sizes.

Costing more than 100 million won, the specialized equipment automatically follows the rotation of the sky, enabling gazers to observe the movement of stars.

When the weather allows, he slides open the roof to explore the cosmos.

A couple times a year, he travels overseas to stargaze. Some countries he’s visited include Mongolia, Canada and Australia. His Web site (www.astronavi.co.kr) overflows with pictures that encapsulate the sun, moon and stars.

Hwang explained that there must be no artificial light, clouds or moonlight in order to get a proper look at the stars. This is why infrequent clear night skies means that he gets no sleep.

Next year, Hwang plans to build a “remote observatory” in either Mongolia or Australia.

He said that with an observatory placed overseas, where the environment is stargazer-friendly, he will be able to observe the stars over the Internet.

“I plan to achieve this dream with people who share my passion,” he said.