Spending an evening with the stars

Spending an evening with the stars 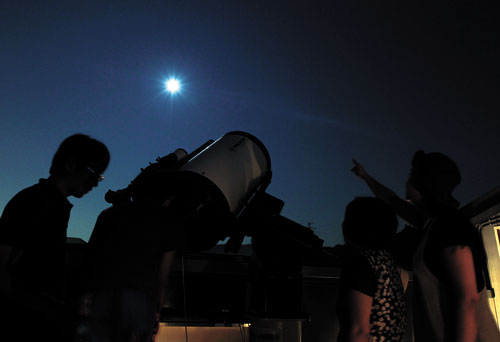 UIJEONGBU, Gyeonggi - Cars packed with amateur astronomers drive onto the grounds of Gyeonggibuk Science High School at 10 p.m. on Aug. 21.

Students and their parents pile out - equipment in hand - and make their way to a nearby rooftop.

The moon, four days from becoming full, sits in the western sky as Jupiter rests in east.

Members of the Korean Amateur Astronomical Society are here as part of their training for a private qualification test called the “Astronomical Instructor Qualification Level 2.”

The observatory consists of a cosmic ray measuring apparatus and a 16-inch reflecting telescope, which is worth 46 million won ($39,451). Jo Yeong-u, one of the members of the society, is an Earth science teacher at the school. Jo finished his undergraduate degree in Earth science and graduated with a masters degree in astronomy at Seoul National University.

The party lays out mats and prepares food and drinks to last them the night.

The most popular member of the evening is Lee Hak-lae, a teacher at Hoecheon Elementary School. He brought a 4-inch refracting telescope with the capacity of an equatorial telescope.

Lee fell in love with the stars 15 years ago, when he first became a teacher and traveled to Mount Yumyeong, Gyeonggi.

“I bought a 900,000 won astronomical telescope as soon as I got home,” Lee said. “Since then, I watch the stars with my students once a month.”

As Lee turns his telescope in the direction of Jupiter, Lee Min-kyung, an instructor at a patent agent institute, screams, “Wow! I can see the bands and satellites around Jupiter!”

“That is the Big Dipper. Can you see the Cassiopeia over there? The one over here is Polaris.”

Later, Lee Hak-lae enters “moon” into the telescope’s input system and the astronomical telescope moves in the direction of the moon.

Min-kyung then connects a Canon digital S.L.R. camera to the telescope and takes photos, which are displayed on its LCD screen. Through the telescope, the camera is able to capture the moon’s uneven craters.

The planet, 3 billion kilometers (1.86 billion miles) from Earth, emits a bluish light. “Uranus takes 84 Earth years to rotate around the Sun and has 27 satellites,” Jo explains.

At 2 a.m., the moon is out of sight and the sky becomes darker.

Because the sky this summer has been unusually cloudy, members tonight are delighted to see a clear sky and are absorbed in taking photographs.

At around 3 a.m., clouds begin to roll in from the southeast. Members now lie down on the mat with binoculars, gazing skyward.

They are playing a game to find the Andromeda Galaxy.

Our neighbor galaxy is 2.3 million light years away, and yet, to the students’ amazement, it can be observed with simply a pair of binoculars.

The evening comes to a quick close at 4 a.m. as clouds cover the sky.

The Korean Amateur Astronomical Society is not made up of professionals and is instead a gathering that focuses on training ordinary people to become qualified astronomical instructors.

There are several online societies that aim to promote stargazing. The Naver cafe “Skyguide” (cafe.naver.com/skyguide) has 14,700 members.

Daum’s most famous stargazing cafe is “The Cosmos” (cafe.daum.net/cosmos), which has 17,000 members.

For more information on the Korean Amateur Astronomical Society, go to www.kaas.or.kr.