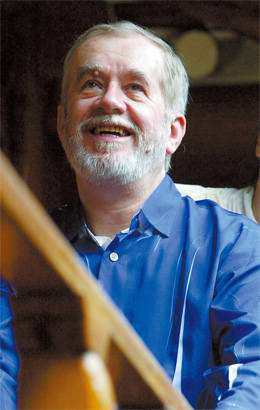 David Kilburn is an advocate for preserving hanok. [JoongAng Ilbo]

With the number of hanok, or traditional Korean homes, dwindling almost daily in Seoul as modernization of the capital marches on, two overseas residents in Seoul have emerged as among their most vocal defenders.

“People say, ‘Why are foreigners fanatical about this?’” said Peter Bartholomew, a Seoul-based American business consultant and hanok dweller. “In the West, we see this value and consider it critical that traditional architecture be preserved.”

The American works to educate Koreans on this heritage, while fighting a legal battle to save his own 70-year-old house from bulldozers.

Briton David Kilburn, a retired reporter, lives in a fairy-tale cottage in the heart of Bukchon, Seoul’s most picturesque district, and lobbies against policies and developers he claims are demolishing tradition and raising ersatz hanok. Hanok are single-story houses built around enclosed courtyards. In Seoul, most date to the early 20th century. Key features include underfloor wood-fired ondol heating and wooden frames resting on stone foundations. Externally, large bricks at the base of walls and smaller ones at the top draw the eye up to a hanok’s most attractive feature: its tiled roof, that with its long eaves, keep the sun off the house.

But hanok are unpopular homes. With Koreans prizing modernity and convenience over aesthetics and tradition, and with property developers aiming skyward, hanok lack profit potential. The result? The destruction of all but a handful across Seoul.

Kilburn, 69, fell in love with hanok “at first sight” in 1987. Since 1988, he has resided in Bukchon, the only area of Seoul designated a hanok preservation district by Seoul Metropolitan Government.

Bartholomew arrived in Korea in 1968 as a Peace Corps volunteer. Then, there was no question of whether he would living in a hanok because it was the only accommodation available. As well as village cottages, he resided in Sunkyojung near Gangneung, Gangwon a famed stately home, on South Korea’s east coast.

“It was so darned beautiful,” he recalls. In 1974, he purchased his own Seoul hanok, which he has restored, modernized and lived in ever since.

Rural hanok were largely obliterated in modernization drives in the 1960s and 1970s.

“There is nothing left in traditional style in the countryside except for government-designated villages,” Bartholomew said. “None of the beauty is there, it’s all gone.”

Meanwhile, in cities, creaky hanok were replaced with space-efficient villas and apartments. Why are Koreans so dismissive of traditional homes?

While old palaces and temples are preserved, private homes are investments.

“The attitude towards buildings is, ‘old [is] bad; new [is] good,’” said Bartholomew. “You don’t throw money at an old building, you tear it down.”

The American, a fluent Korean speaker, crusades for hanok. He sits on the board of Korea’s National Trust, conducts walking tours, speaks on TV, writes for newspapers and delivers lectures on hanok.

“The reaction from Koreans is, ‘If I’d known this, I would not have demolished my house!’” Bartholomew said. “I’ve had this comment many times.”

Kilburn hosts key people - cultural figures, journalists and educators - in his hanok, but is more combative. He records the demolition of Bukchon hanok with his camera and remonstrates with bulldozer crews, a tactic that saw him hospitalized after a fight with a foreman in 2006. His Web site, www.kahoidong.com, offers more than 1,000 pages of documentation on the issue. Both men fume over official preservation policies.

“Government moves to preserve the hanok of Bukchon have been, and are, a consistent and total failure,” Kilburn seethes. “What the government claims in its public announcements and press releases bears no relation to what it has allowed to happen.”

There were more than 1,500 hanok in Bukchon in 1985 and by 2007, the number had fallen to 900. While the government promotes Bukchon as a traditional district, visitors will notice how suspiciously new its hanok appear - most are only five to 10 years old.

Kilburn alleges that residents have been forced out by “intimidating behavior” from developers, transforming Bukchon into a museum rather than a living neighborhood.

“Now, it is a ghost town, since the new homes are second or third homes, or speculative investments, and empty nearly all the time,” he says

Meanwhile Bartholomew is fighting for his own home, facing a compulsory purchase order - a prelude to redevelopment. Having challenged Seoul Metropolitan Government’s plan in a class-action suit, he won the case. Yonhap