One woman’s love for Korean soccer

One woman’s love for Korean soccer 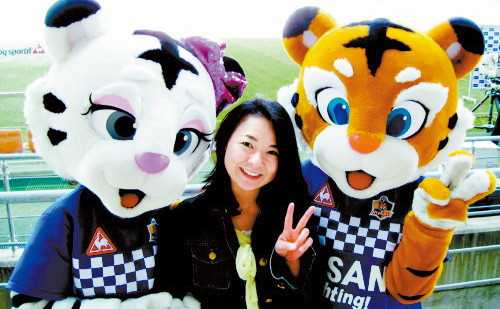 Mio Kawasaki poses with the mascots of the Ulsan soccer team after a match at Munsu World Cup Stadium in Ulsan. Provided by Kawasaki

Mio Kawasaki is not your average K-League fan.

Kawasaki, 38, arrived in Seoul Aug. 27, a day before the big football match between Suwon and Seoul.

After buying a ticket at the game, Kawasaki cheered her heart out with other Suwon supporters.

The following day, she proceeded to Ulsan for the Ulsan-Pohang match. For the players, it was just another game, but for Kawasaki, it was much more.

It happened to be her 100th K-League game.

On her last day in Korea, Kawasaki visited a training session for Ulsan Hyundai. Afterwards, she enjoyed a dinner of steamed monkfish with soju. The next afternoon, she returned home to Japan.

This is how she has spent her weekends for the past ten years.

Kawasaki’s love affair with Korean soccer began in 1998 when she became enamored with a Korean player fresh out of high school, Lee Dong-gook.

“He was excellent at soccer, and handsome, too,” she recalled.

But it was not Lee, but Cho Hyun, who used to play for Suwon Samsung Bluewings, that cemented her resolve to visit Korea.

“Suwon Samsung Bluewings were fairly famous in Japan at the time, and Cho Hyun was a player who contributed a lot to the team,” Kawasaki said. “Ko Jong-soo was the biggest star, but I was always a fan of Cho.”

On Sept. 12, 1999, Kawasaki was present at a match between Suwon and Bucheon in which Suwon triumphed 3-0.

Cho’s transfer to Ulsan in 2001 again brought Kawasaki to another K-League match. Although she returned to Korea on April 7, 2001 for the Ulsan-Busan game to cheer on Cho, he was left on the bench.

But for her, this was an unforgettable day.

“This is the day the special relationship between Ulsan and I, and the K-League began,” she said.

At the time, Kawasaki’s Korean was non-existent. But a Japanese-speaking taxi driver helped her find her way around once she arrived at the airport. Another person even took her back to the airport for free.

The Ulsan soccer team also greeted Kawasaki with enthusiasm, and invited her to their after party once the game ended.

“I was touched by the jeong [a Korean sentiment similar to warmth and affection] shown by Ulsan’s people,” Kawasaki said. “I’d never had such an experience in Japan.”

From then on, Kawasaki boarded a plane to Ulsan every time she had a chance. Players, moved by her devotion, also presented her with signed uniforms as gifts.

While she is in Tokyo, she polishes up on her Korean at a language school.

After nearly ten years of study, she is able to hold simple conversations in Korean.