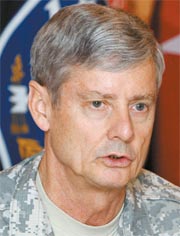 “We take the threat very seriously, what they will do in the future,” Gen. Walter Sharp, commander of the U.S. Forces Korea, said at a press meeting.

Given the strength of South Korean and U.S. troops in a normal all-out attack, North Korea is “putting more money” in building up special operations forces, missile technology and nuclear weapons, Sharp said.

Looking at the North’s past pattern, “It is all very worrisome,” he said.

Future provocations from the North would be carried out with its unconventional armed capabilities, or “asymmetric warfare,” the commander said.

All of the South Korea-U.S. joint exercises have been aimed at deterring and defeating North Korean provocation that would come in the form of asymmetric threats, he said.

The computer-simulated operation was designed to ensure stability in North Korea in case of war, based on lessons the U.S. has learned from its wars in Iraq and Afghanistan, he said.

“We are really trying to make sure that we are able to not only defend, not only able to kill and attack, but also able to provide humanitarian assistance and to provide security and stability for the people [in North Korea] because all of those tasks will have to be done via soldiers in future conflict,” Sharp said.

This year’s stabilization plan involved the South’s Ministry of Unification in charge of North Korean affairs.

“One of the lessons we have learned out of Iraq and Afghanistan is that especially in the stabilization area, in any type of future conflict, it is really a whole government, not just military, that has to be united together,” Sharp said.

The allies scheduled a series of joint drills after the deadly sinking of a warship in March as a display of force. The latest of the maneuvers, set for this week, was delayed because of a tropical storm.

The drills, the second joint military response since the March sinking, were scheduled to begin Sunday and take place through Thursday in the Yellow Sea.

Sharp said the allies would soon announce a new date for the exercises.