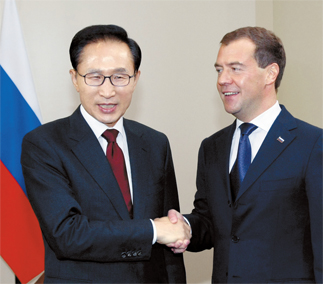 South Korea is willing to start another joint economic project in the North, modeled after the Kaesong Industrial Complex, President Lee Myung-bak said yesterday in a TV interview in Russia, as he urged Pyongyang to cooperate with Seoul’s vision to improve stalled inter-Korean relations.

“It is possible that a second Kaesong Industrial Complex will open if the North takes measures to improve cooperation and to ensure South Korean investments, and we hope to see such a development,” Lee said yesterday. “The choice is ultimately up to North Korea.”

Lee arrived in Russia Thursday for a two-day trip that was to include meetings with Russian leaders and attendance at an international political forum. In his interview with state-run Russia 24, Lee called the Kaesong Industrial Complex “the last window of inter-Korean cooperation.”

“That’s why the South Korean government wants to keep it and further develop it,” Lee said. “And I believe the North agrees with that.”

“I believe North Korea must apologize for the Cheonan’s sinking and return to a normal relationship,” Lee said. “Although inter-Korean relations are stalled now, the two Koreas will someday have peaceful ties and maintain peace, prompting active economic cooperation. The relationship can be normalized. I am not sure when the time will come, though. It may be soon, or it may take time.”

Lee’s remarks, as well as his meetings with Russian leaders who highlighted the need for better ties between the two Koreas, came amid signs of a thaw in the frozen inter-Korean relations. The Lee administration is considering sending its first rice aid to the North as a part of a flood relief package.

In his interview, Lee also touched on the issue of the North’s expected power succession.

“It will be a third-generation succession from Kim Il Sung to Kim Jong-il and then the next,” Lee said. “We cannot say whether such a succession is possible or not, because it is an internal matter of North Korea. Even if a successor is named, I don’t think he would be my counterpart.”

Asked about a possible meeting with Kim Jong-un, the heir-apparent of the North and the youngest son of Kim Jong-il, Lee said, “If I meet with Defense Chairman Kim Jong-il and if [Kim Jong-un] sits next to his father, I may meet him obviously,” Lee said. “But he won’t be my counterpart. I don’t think such a meeting will have any special meaning.”

Following his meeting Thursday with Russian prime minister Vladimir Putin, Lee met with Russian counterpart Dmitry Medvedev yesterday to discuss bilateral issues and efforts to maintain regional stability. The presidential summit took place on the sidelines of an international forum near Moscow. The Lee-Medvedev meeting focused on cooperative measures to maintain stability on the peninsula, the Blue House said. Cooperation in the resource-rich region of eastern Siberia was also discussed, along with efforts to support Korea’s successful hosting of the G-20 Summit.

The themes of economic cooperation and inter-Korean ties were covered during Lee’s meeting with Putin on Thursday. Putin, former president of Russia, still remains a political heavyweight in the country.

At the meeting, the two leaders celebrated that the strategic cooperative partnership between the two countries has expanded over time, with the 20th anniversary of South Korea-Russia diplomatic relations, the Blue House said.

Economic cooperation measures were extensively discussed between the two leaders, as they expressed concerns that stalled inter-Korean ties would hinder both South Korea’s and Russia’s efforts to make progress on some projects.

“I hope that South-North Korean relations will be normalized,” Putin was quoted as saying by the senior Blue House secretary for public affairs, Hong Sang-pyo.

South Korea and Russia had previously agreed to link the trans-Korea railroad with the trans-Siberian railroad, and Lee noted that a linkage from North Korea’s Rajin to South Korea is a crucial factor.

“The project will only be economically viable for Russia and South Korea when progress is made on that aspect,” Lee was quoted as saying. “The two Koreas and Russia must cooperate to resolve the problem. Under the current situation, the project is economically not viable.”

Lee also expressed his frustration about the stalled project to supply Russian natural gas to South Korea as early as 2015 - possibly via North Korea.

The ambitious project was announced during Lee’s trip to Russia in September 2008, and both Moscow and Seoul had expressed hopes to build pipelines through North Korea for both political and economic reasons.

“The project is economically viable when the pipelines are built through the North, but under the current circumstances, it is difficult to move it forward,” Lee said. “We should continue our discussion further on this project.”

According to the Blue House, Putin agreed that inter-Korean relations are the key to the railway and gas pipeline programs.

The Russian leader promised his efforts to make some progress, Hong said.