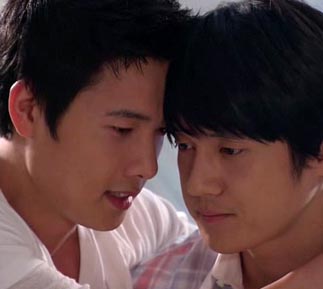 A scene from the controversial TV show “Life is Beautiful,” the first drama to revolve around an openly gay couple. [JoongAng Ilbo]

The SBS drama “Life is Beautiful” celebrated when the network announced recently that it would air 13 additional episodes of the show. It was a significant milestone for any program, but even more so for the first drama about an openly gay couple in a society that is still conservative when it comes to sexuality.

Critics say that the program’s success reflects the Korean public’s increasing tolerance of homosexuality, but continuing controversy over the drama has also exposed a rift within the Christian community between groups that support the drama and those that believe it is inappropriate for evening television.

One of the groups that has raised the most objections to the drama is the Christian organization Esther Praying Movement.

“I don’t understand why there is a homosexual couple on a TV drama, which is supposed to be for families,” Lee Yong-hee, 51, a member of the group and a professor at Kyungwon University, wrote on the group’s Web site. “Seeing two guys hugging each other implies they are having a sexual relationship.”

Esther Praying Movement held a meeting to discuss the issue last month and is planning to focus an issue of its monthly magazine on the subject in the future.

But not all Christians agree.

Jung Hae-joon, a pastor at Korean Christian Presbyterian Church, says that gay people should get the same respect as everyone else.

“The Bible can be interpreted differently depending on the individual, so we have to be flexible in applying what the Bible says and adjust to contemporary trends,” Jung said. “Christians should not condemn people who are in the minority in society. We should reach out and help them.”

Korean society has been slow to accept homosexuality in its ranks. In 2000, when Hong Suk-chun became the first actor to come out as gay, he was fired from all six of his TV shows.

Since then, a number of Korean dramas and movies dance around the issue, but Life is Beautiful is the first to feature an openly gay couple. The 2001 movie “Bungee Jumping of Their Own” had two male characters who were in love, but one was a man reincarnated as a woman. And there were homosexual undertones in the 2007 drama “The 1st Shop of Coffee Prince,” which featured a female character who disguises herself as a man and gets involved with the male lead.

Viewers commenting on Life is Beautiful’s Web site are largely supportive of the drama.

“I highly respect the writer’s courage to cover homosexuality in the drama, for it is such a rare theme and risks becoming controversial. I hope it will help our society to be at peace without any prejudice,” a user named “nick**” wrote on an online forum.

Kim Soo-hyun, the writer of Life is Beautiful, said she was focused more on portraying family relationships than on homosexuality.

“I approached the issue of homosexuality as though it could have happened to my son,” she said.

*This article was written with assistance of staff reporter Moon Gwang-lip.