Extracurricular learning can be fun

Extracurricular learning can be fun 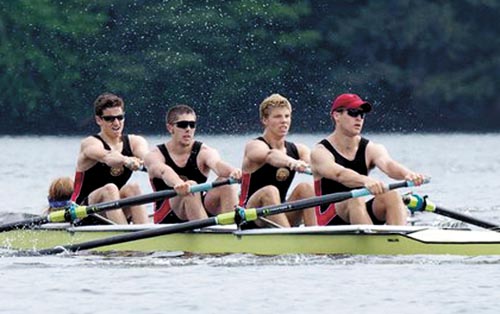 U.S. high schools specialize in after-school activities, as these students on the crew team of Groton School show while practicing in the spring of 2010. Provided by Jon White


Lee Kyung-eun, a junior at Myungduk Foreign Language High School in Seoul, attends several after-school programs. Yet despite the hours of effort she puts in, she’s dissatisfied.

“They are only extensions of academic classes like mathematics, English and social studies that help prepare for the upcoming College Scholastic Ability Test,” she said. “We meet the same staff and experience the same kind of lessons.”

Jon White, 17, attends Groton School in Massachusetts, a prestigious private boarding school. When it comes to extracurricular activities he has little to complain about. White is on the crew team and has been a school tour guide for three years.

“There are so many activities to choose from,” he said. “For instance, there are programs for sports I never would have guessed to be offered in a high school, such as squash, winter track and crew. There are really interesting arts and music programs, too.”

White expects to row in college and is applying to Dartmouth. He intends to tell the admissions office about his deep commitment to the sport on his Common Application, a standard application form used by many U.S. colleges. The Common Application allows applicants to list up to 12 extracurricular activities he or she has participated in. It’s an important category, as American colleges hunt for well-rounded applicants.

The Korean government recently proposed a greater focus on after-school programs to relieve the personal and financial pressure cram schools put on students. The problem is, Korean universities and colleges are not interested in applicants’ extracurricular activities, and students know that, said Suh Hee-sook. When Suh’s son Daniel was in high school, the family moved to New Jersey. He now attends Whippany Park High School.

Suh said students interested in extracurriculars are penalized under the Korean system, because they don’t have as much time to cram for tests.

A straw poll of students who attend Korean high school found the vast majority thought after-school programs offered to them were of poor quality, but a similar majority of students at American high schools were satisfied with their extracurriculars.

“It definitely pertains to what every high-achieving high school student thinks about and which governs all their decisions: college,” said Hwang Jung-sun, an English teacher at Myungduk.

Hwang said the American college application process rewards a balance of academic excellence, represented by SAT scores and transcripts, and leadership and other talents, proven through extracurricular activities.

Korean institutions, however, are concerned about two things: transcripts and test scores, Hwang said. As a result, “Korean students and their parents as a whole become inevitably less interested in the after-school programs their high schools offer. As cram schools become mandatory to get into a good college, after-school programs suffer from a lack of support from teachers, parents, and students.

“Korean students do not receive the benefit of developing leadership and teamwork abilities from sports or any school club, confidence from the performing arts, and countless other attributes,” Hwang said.

Seo Hyo-rim, a Myungduk student, said, “Things like leadership and confidence cannot be taught in class or cram school. After-school programs are where I can develop these things through interactions with other students.”

*This article was written with assistance of staff reporter Lee Eun-joo.