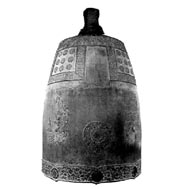 In 1998, the Gyeongju National Museum analyzed the composition of the King Seongdeok Bell, which is designated as National Treasure No. 29. The results showed that the bell was composed of 85 percent copper and 14 percent zinc. No traces of calcium phosphate, an ingredient in human bone, were found, which helped to debunk the long-standing legend about the bell and its creation.

The legend has it that a baby was cast into the bell when previous efforts produced soundless bells that would not ring. In reality, there are no written records before the start of the 20th century giving credence to that legend.

According to the history book “Samguk Yusa,” or “Memorabilia of the Three Kingdoms,” King Gyeongdeok tried to build a bell for King Seongdeok with 120,000 geun of copper (72 tons), but failed to complete the job. His son King Hyegong completed the bell and dedicated it to Bongdeok Temple in 771. In other Goryeo and Joseon era documents that mention the bell, there is nothing suggesting a baby was sacrificed for its completion.

It is believed that the oldest material containing the legend is “The Passing of Korea,” written by American missionary Homer Hulbert in 1906. Hulbert wrote that Koreans said the bell was made with the sacrifice of a baby and tolled with the sound “Emmi, Emmille.” He also said that the sound “Emmi, Emmille” meant “Mother, because of Mother.” According to his book, however, the bell was located not in Gyeongju but in the center of Seoul.

The King Seongdeok Bell, which is also known as the Emille Bell, was the subject of “Emille Bell,” a play written by pro-Japanese writer Ham Se-hun in 1942. Because of the play, some people speculated that the folktale was fabricated by Japanese imperialists trying to diminish Korea’s cultural heritage.

Mun Yeong, a historical novelist, pointed out that there was a similar folktale in China’s Tang Dynasty. He said that messages accusing those in power of taking human lives were probably turned into a folktale about human sacrifice. For those who made the sacrifice, the bell’s toll must have sounded mournful and full of resentment.

Last Tuesday in Dangjin, South Chungcheong, a young man lost his life when he fell into a 1,400-degree Celsius ( 2,552 Fahrenheit) blast furnace. After the incident, a moving elegy was posted on the Internet by an anonymous writer. It said, in part: “Do not use molten metal / The life of a young man disappeared in the heat / Do not use molten metal... Mold his face with clay / Pour molten metal on it / When it is cooled by rain, polish it with your utmost effort / And erect it at the main gate / So his mother can touch the face of her son / When she visits the place where he died.” I sincerely hope that the elegy encourages people to think about the value of life and how we can preserve it by preventing careless accidents like the one in Dangjin.