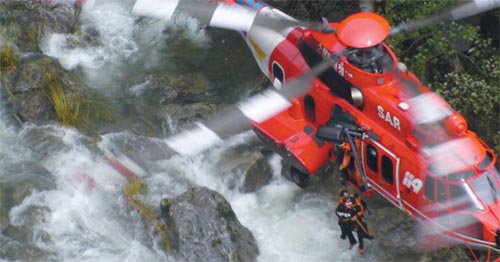 A helicopter from the National Emergency Management Agency rescues mountaineers on Mount Kalbong in Gapyeong, Gyeonggi province, yesterday. Twenty four people, including six visually impaired mountaineers, were rescued yesterday having been trapped since Saturday after heavy rain wiped out trails. Three choppers and 70 rescuers were dispatched and all the hikers were saved. Other flood damage was reported around the nation [NEWSIS]