Funds for opera house up in the air

Funds for opera house up in the air 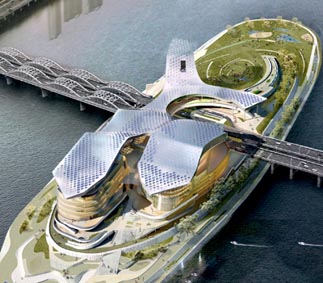 A rendering of the opera house’s plan.

The action widens a chasm between Seoul Mayor Oh Se-hoon of the ruling Grand National Party and the council dominated by opposition Democratic Party councilors.

The Seoul city government originally planned to break ground for the opera house construction within this year, and it has already used 52 billion won for purchasing the land and picking an opera house design.

If completed in April 2014 as scheduled, the opera house, with eight stories above ground and two below, will be built on a 24,981 square meter plot.

Under the plan envisioned by Oh, the opera house would have a concert hall and an opera hall that could accommodate 2,100 and 1,700 people, respectively.

DP councilor members argued that the Seoul city government doesn’t have concrete plans to come up with funds for the megaproject, and they supported abolishing a bill to create the foundation because it’s unclear whether the project will succeed.

The Seoul city government made clear it won’t step back.

“Considering international status and the performance infrastructure of Seoul, Seoul must have a landmark culture and art facility like the Sydney Opera House and the Guggenheim Bilbao Museum in Spain,” said Ahn Seung-il, director general of the Seoul Metropolitan Government’s culture bureau.