Master of the unexpected

Master of the unexpected


The 64-year-old Polish-American architect Daniel Libeskind has designed museums and moments around the world. His work will be showcased in Korea this month at the Seoul Design Fair 2010, when his design for one of three pavilions set up for the event is unveiled. The fair begins Friday at the Jamsil Sports Complex in eastern Seoul.

Libeskind is perhaps best known for his design of the Jewish Museum in Berlin and his plans for the reconstruction of the World Trade Center site in New York.

In a recent e-mail interview with the JoongAng Ilbo, the New York-based architect talked about his architectural philosophy and the inspiration behind his design for the pavilion.


Q. What was the inspiration for the pavilion you created for the Seoul Design Fair 2010?

A. I was inspired by the butterfly and its extraordinary lightness, elegance and connection with nature.

Architecture and nature are certainly intertwined, and the butterfly is a perfect model for the architecture of the impermanent, as it both blends into its surroundings and at the same time is free to chart its own way.

In this sense, the Seoul Design Pavilion is both integrated into the fair and at the same time asserts its own identity.

What has been the most challenging project for you, and why?

It was the master plan for ground zero because it is the most emotional, political and difficult project I have undertaken.

What stories do you expect Freedom Tower [which will be built on site of the World Trade Center] will tell the public? I heard that some aspects of your original plan were changed in the final draft. Which aspects have changed the most?

The original Freedom Tower had a spectacular garden ascending all the way to the apex - that element was unfortunately not maintained.

Other than that, the entire massing, position, symbolism and function reflect my original idea.

Freedom Tower is the highest point of the spiral - which contains four other major skyscrapers - which together form the emblem of the torch of the Statue of Liberty.

As such, its apex rises from the bedrock of the memorial to a height of 1,776 feet. This is a meaningful number because it symbolizes the year of the Declaration of Independence, which was the first document to speak of human rights. 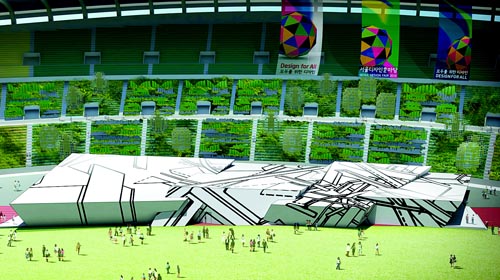 Daniel Libeskind’s design for this pavilion at the Seoul Design Fair 2010 was inspired by the butterfly. Provided by the organizer


What were you hoping the Jewish Museum Berlin would communicate to people?

The Jewish Museum’s history is so close to me personally [Libeskind is Jewish] and it is the very first architectural project that I undertook. It represents the Star of David, which is drawn through a connecting address point in the city, creating a Star of David that is unique to Berlin.

What I expect the design of the museum to communicate is the 1,200-year-old history of the Jews of Germany, the tragedy and abyss created by the Holocaust, and the redirection of the city of Berlin and Germany out of its ashes and into a hopeful future.

You have designed a lot of museums. How do museums differ from other spaces?

Every museum is unique to its place, its program and its spirit.

Of course, what is unique to a museum is that it is a place of imagination and creativity. And as such it is a sacred space in the contemporary world.

A museum of the 21st century is one which incorporates new public activity. It is not merely a container or a box but rather an open-ended structure which engages the public in many dimensions.

Is there something that you always include in the museums that you design?

Yes, I always put the unexpected into my museum designs.

The spatial organization of the museums that I design is one which amplifies the complex relationships of culture and creates spaces which do not simulate what has been. By creating imaginative encounters, every museum I have designed brings traditional programs in touch with totally new possibilities of the future. And that is always unexpected because it challenges the museum visitor with an as yet undefined field of thought.

What is your architectural philosophy?

Every building should tell a story because architecture is a language of communication.

You have participated in projects in Korea with Hyundai and Busan I’Park, among others. How do you feel about working here?

I love working in Korea. Korea is one of the most creative and sophisticated societies I have ever been to and I feel that the architecture of Korea in this century should reflect more of these dimensions not only in its buildings but in city scale and planning.

Where do you get your inspiration from? Do you have any advice for future architects?

From life! It’s good to take risks because the world is changing every second!