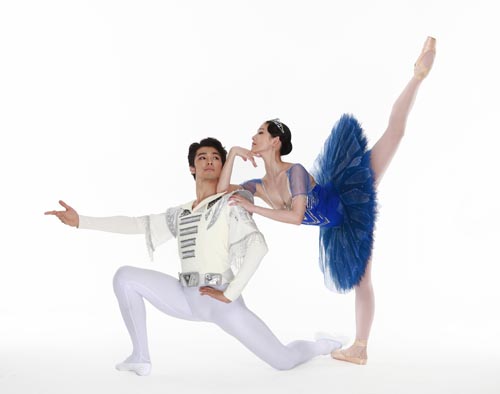 Principal dancers Kim Hyun-woong, left, and Kim Ju-won from The Korea National Ballet perform in ‘Raymonda.’ The dancers will perform Sept. 25 and 29. Other dancers will take the roles in concerts Sept. 26-28 and 30 at Seoul Arts Center in southern Seoul. See THEATER, below. Provided by the KNB

EXHIBITION OF SOUND WITH ERDOS HAN

Friday: The Seoul Metropolitan Traditional Music Orchestra is expanding its scope in this concert featuring music and painting. The performance was organized in conjunction with Erdos Han, a western painter. The concert starts at 7:30 p.m.

Sept. 30 to Oct. 30: This festival has established itself as one of Asia’s major opera events since its inception in 2003. This year’s festival includes productions from Korea and abroad and opens with “Faust.” The program also features: “Eugene Onegin,” “The Barber of Seville,” “Andrea Chenier,” “The Merry Wives of Windsor,” “The Marriage of Figaro,” “Simsan Kim Chang-sook” and “La Traviata.”

Oct. 2: Japanese pianist, composer and arranger Yuhki Kuramoto has long been loved by Korean audiences. His lyrical melodies are played in an easy listening style and the lyrics are reminiscent of a Japanese haiku.

Kuramoto will perform some of his hits, including “I Suppose Flowers Will Fall” and “On a Sentimental Snowy Day.” The concert starts at 8:00 p.m.

To Sunday: This drama features popular actresses Gum Bo-ra and So Yu-jin in an emotional mother-daughter story. The mother, played by Gum, constantly discourages her daughter, played by So, who wants to be a novelist. Despite this negativity, the daughter continues to pursue her dream. Performances are at 4 and 8 p.m. on Wednesdays and Fridays, at 8 p.m. on Thursdays, at 4 and 7 p.m. on Saturdays and at 3 p.m. on Sundays.

THE KING IS THE KING

To Sunday: This is the second in the World Contemporary Play Series following “Darwin’s Tortoise” in 2009 and the first Arabic play introduced in Korea. It is told in the tradition of the “One Thousand and One Nights” collection of folk tales, and is a fable about power and desire.

To Sunday: This musical draws on the life of Empress Myeongseong, who is viewed by many as a national heroine for her efforts to keep Korea free of foreign influence. The musical was first staged in 1995. It was the country’s first original musical theater production and succeeded in setting a new standard for historical theater in Korea. This will be the last chance to see Yi Tae-won in the title role. The veteran musical actress took the role of the empress in 1997 and has since established herself as the representative Empress Myeongseong.

Sept. 25 to 26: This performance celebrates the 20th anniversary of diplomatic relations between Korea and Russia. The Russian Classical was created in 2004 under the auspices of Russian ballet dancer Maya Plisetskaya. The soloists are graduates of the Moscow Dance Academy and St. Petersburg’s Vaganova School, among others. The program for Saturday is Tchaikovsky’s “Sleeping Beauty,” and “Swan Lake” will be shown Sunday.

Performances start at 3 and 7 p.m.

Sept. 25 to 30: Raymonda is one of Russian composer Aleksandr Glazunov’s best works. The ballet’s plot is based on a medieval legend about the rivalry between a noble knight and a not-so-noble one for the love of the young Raymonda. Since its premiere in 1898, Raymonda has been a fixture in the repertoires of many theaters, but in recent years only some scenes are performed and it is unusual to see the production in its entirety.

While retaining fragments of the original choreography by Marius Petipa, Yuri Grigorovich has created new roles for the soloists and corps-de-ballet. The performance starts at 7:30 p.m. on Saturday and weekdays, and at 3 p.m. on Sunday.

To Friday: This performance showcases five different Korean traditional dances such as seungmu, a slow and meditative dance performed by Buddhist monks, and sogochum, a cheerful dance with a small drum called a sogo.

To Nov. 20: The title of this year’s biennale is “Living in Evolution,” based on the idea that art, in all its various forms, has contributed to the intellectual evolution of the human race. The artistic director is independent Japanese curator Takashi Azumaya. The main exhibition features more than 160 artworks by 72 artists from 23 countries. Exhibition hours are 10 a.m. to 6 p.m.

To Nov. 17: This showcase is focused on new media art. The 45 participating groups of artists from 21 countries include famous names like the British-American artist Sarah Morris and Thai film director Apichatpong Weerasethakul. Among the Korean artists involved are Cho Duck-hyun, Lim Min-ouk and Noh Sun-tag. This year’s theme is “Trust.” The artworks in the show will tell or ask what trust is, as the expansion of media brings about a distortion of information and the blurring of messages, organizers say.

To Nov. 7: The biannual contemporary art show in the southwestern metropolitan city features photographic, installation and media work by about 120 artists from 31 countries. This year’s theme is “10,000 Lives,” or “Maninbo” in Korean, and is inspired by and named after the epic poem by renowned poet Ko Un.

Tickets range from 2,000 won for children to 14,000 won for adults. From Seoul, take a flight to Gwangju Airport or take a KTX train to Gwangju Station.

To Oct. 30: The fourth edition of this annual festival presents 34 pieces of contemporary theater, dance and music from various countries, including “Krapp’s Last Tape” written by Samuel Beckett and starring avant-garde director and playwright Robert Wilson, who will both direct and act in the one-man show. Other performances include a modern version of “Othello” by the Comedy Theater of Budapest (Vigszinhaz Comedy), the Slovakian “Tango” by director Rastislav Ballek, and “Boshobari,” “Kawakami” and “Kusbira” - a Japanese traditional comedy trilogy in the kyogen tradition. Also at the event will be “Grand Egypt and Aida” by the Cairo Symphony Orchestra, “Giant in the Sun” by a Nigerian company and more.

Friday to Oct. 7: The Seoul Design Olympiad of 2008 and 2009 has been reborn as the Seoul Design Fair 2010. The design fair will feature an international competition, a variety of special exhibitions and design classes. The Industrial Design Exhibition features design work by more than 200 brands from 20 countries, from jewelry and furniture to exhibition displays.

To Sept. 30: This festival, now in its 12th year, is one of the most comprehensive festivals for percussionists both amateur and professional. The lineup of foreign acts includes Funcussion from Japan, T.A.G. from France, artists from India’s Punjab Art Center and the Nueva Informacion del Grupo from Mexico. The list of Korean groups includes Jin-Suei Samulnori, Sound Box, Hata, Knock Percussion Ensemble, Hannulsori and Kim Hee-hyun & Ah U-reum.

Sept. 24 to Oct. 3: Andong is famous for many things, among them the Joseon yangban elite and traditional Korean masks. The 2010 Andong International Maskdance Festival features live music and dance by master performers. There will also be plenty of opportunities for spectators to get involved in workshops and performances.

From Seoul take a bus to Andong, North Gyeongsang. The exhibition site is adjacent to the bus terminal.