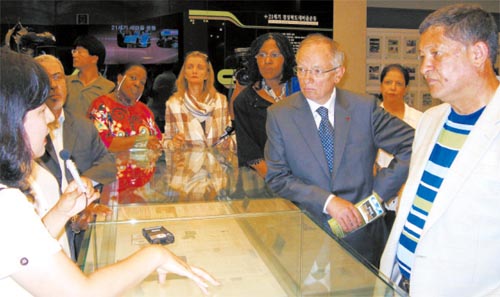 
African ambassadors to Korea and their families visited Gumi, North Gyeongsang, last Friday for two days at the invitation of the Ministry of Foreign Affairs and Trade to learn about the Saemaeul Movement.

The Saemaeul Movement was launched by former President Park Chung Hee in Gumi in the 1970s to develop rural areas. Often seen as a model for other developing countries, including those in Africa, high-ranking officials from the Foreign Ministry traveled to the continent this year to share information about the plan .

“We are trying to globalize the spirit of the Saemaeul Movement,” an official from the Gumi city government said. “It was an opportune visit and we hope to have substantial exchanges between Korea and African nations in the near future.”

In Algeria, a development plan similar to the Saemaeul Movement, entitled Twiza, is already underway, according to Hoshin Sahraoui, the Algerian Ambassador to Korea.

“Not only African nations, but also South Asian nations are trying to use the Saemaeul Movement as a model these days,” an official from the Foreign Ministry said. “We have to come up with plans that are custom-made to fit the unique local environments of these countries.”

“I felt the passion and dedication of each Korean to economic and political development,” Alfredo Dombe, counselor from the Republic of Angola to Korea, said. “Now it is time for Angola to do the same.”

The group visited the Saemaeul Movement Memorial Hall and the Gumi Industrial Complex, among other places.