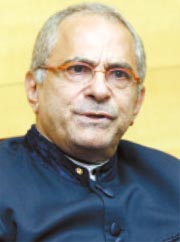 Ramos-Horta was speaking at a press conference held in Seoul on Sept. 6. He was in the country at the invitation of Ewha Womans University’s Center for Peace Studies.

To resolve the Cheonan issue, Ramos-Horta recommended that the South Korean government “continue talks with North Korea” and said that the six-party talks “should continue to propel the issue.”

Resolution of the issue is also the responsibility of South Korea, Ramos-Horta said, “since South Korea is the host country of the G-20 summit.”

“South Korea’s previous position as a colony and a country recovering after the [1950-53 Korean W]ar, as well as its economic revival, is especially important,” he said.

“A system based on oppression and fear will surely collapse,” he said. “The [collapse of the] Soviet Union and the Berlin Wall proves that North Korea’s situation will not last forever.”

Ramos-Horta was a leading figure in East Timor’s independence movement before he became president.

He was awarded the Nobel Peace Prize in 1996, which he shared with his countryman Bishop Carlos Filipe Ximenes Belo.

Despite his criticism of North Korea, Ramos-Horta said he does not despise the country. “In a humanitarian sense, I would like to call North Korean leader Kim Jong-il my brother,” said Ramos-Horta.

“However, Kim needs to show he can change by abandoning his nuclear weapons.”

In addition to talking about the situation on the Korean Peninsula, Ramos-Horta discussed the role of Asian countries in bringing about peace and stability in the region.

“Although Asia is the most dynamic area in the world, the malaise will continue through ongoing conflicts in politics and the military and the existence of poverty,” he said. “Therefore, Asia’s rich countries - South Korea, China, Japan and Indonesia - must cooperate to resolve these issues.” Ramos-Horta believes that as a democratic nation, South Korea is responsible for setting an example for North Korea, so that North Koreans can experience changes similar to what the East Timorese did.

“East Timorese who previously lived in South Korea are changing the structure of the labor force in East Timor,” he said. “Through these people, other East Timorese are more hard-working and diligent, like Koreans.”