A STRATEGY BEGINS TO FORM
Assault on Seoul takes shape

Last week, General Paik described how an allied-forces counterattack and the ROK victory at the Battle of Dabudong paved the way for the Incheon landing assault, a pivotal battle in the war. 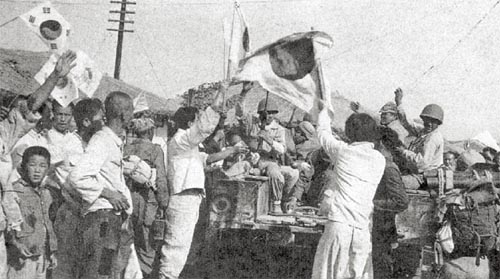 Having started a counteroffensive at the Nakdong line, the ROK 3rd Division crossed the 38th parallel on Oct. 1, 1950. In the photo, a crowd gathers waving Korean flags as the ROK 3rd Division drives by. Provided by the U.S. National Archives and Records Administration


With the allied forces ready to march north towards Seoul and then Pyongyang, I stated my intention to join the attack to the 1st U.S. Corps commander, Frank Milburn.

However, General Milburn’s orders were different. He wanted ROK troops to remain behind the front lines and take care of any remaining enemy troops before making our way up to Cheongju.

I, along with my regimental commanders, was disappointed to hear the news. We desperately wanted to participate in the U.S. forces’ efforts to regain Seoul.

I gave an order to the commander of the ROK 12th Regiment to clear the area under our supervision of any enemy troops.

I got an unfavorable reaction from the commander; he must have also wondered why we had to go through with such efforts when enemy troops were not even within sight. I knew what Colonel Kim was thinking. He, along with all other commanders, did not understand the detour. They wanted to head north to reclaim our capital city of Seoul.

It was only natural for morale to drop. They were experienced combat veterans who had endured the difficult Battle at Dabudong.

Seoul held a special place in our hearts, since our families and loved ones were left behind there. And as soldiers, we wanted more than anything to participate in combat along the front lines.

We started from Gunwi County in North Gyeongsang and advanced north from Sangju to Boeun to Miwon, spending about a week hiding out in Mount Sokri and carrying out mop-up operations against the enemy. But we did not encounter any significant battles. We merely had small-scale exchanges of fire.

ROK soldiers finally arrived in Cheongju, North Chungcheong and set up a division command post at the North Chungcheong Provincial Building. We received news that the ROK Infantry 1st Corps on the East Sea coast had finally crossed the 38th parallel. We were anxious to partake in such missions, but there was nothing we could do but carry out orders assigned to us.

It’s always good to avoid fights. It’s always wise to avoid frivolous arguments, and better yet, avoid giving others a reason to start arguments. It’s different, however, when an opponent instigates a fight. One must be bold enough to respond to such challenges.

As a soldier responsible for protecting a country from outside forces, it is imperative for us to join in on the battle on the front lines and attempt to annihilate the opposition.

Despite our eagerness, the situation in Cheongju was no different.

It was at around this time a familiar face joined us - Colonel John H. Michaelis of the U.S. Infantry 25th Division, 27th Regiment. They were responsible for providing us with support. I became full of hope about what our next mission could be. With Colonel Michaelis and his men providing us with support, would they ask us to join in on the front lines and march towards Seoul, en route to the bigger goal of seizing Pyongyang?

With time concerns and the danger of ambush, my hopes were resting on the World War II-era plane L5 to get me to an airport in Daejeon. My goal was to get permission to participate in major battles. I went by jeep to the South Chungcheong Provincial Building. The parking lot already contained several vehicles. I made a stop at the governor’s office on the second floor. Gen. Frank Milburn was not in the office at the time, but Chief of Staff Rinaldo Van Brunt and several others were already there.

I was handed a thick envelope containing a plan to move on to Seoul and Pyongyang.

Other commanders had already picked up the package. I opened the English language booklet - close to 200 pages in length - and quickly flipped through it.

Allied forces from the Incheon Landing on Sept. 15, 1950 were able to begin their attempt to seize Seoul after the ROK and U.S. Army carried out counter-offensives at the Nakdong line. In the photo, U.N. troops cautiously make their way into Seoul. [JoongAng Ilbo]

In short, the booklet detailed how the U.S. 1st Cavalry Division and the U.S. Infantry 24th Division would advance to Pyongyang.

It was a detailed plan, which was obviously thoroughly thought out by the U.S. commanders in charge. Even then, I could not fathom how the ROK Army could be excluded from the plans to attack and seize the enemy’s capital.

I felt we had proven ourselves at the Battle of Dabudong and the counter-offensive at the Nakdong line.

I knew that if I took the booklet back to my men and gave out orders accordingly, the morale of our men would hit rock bottom. I respected the thorough process the U.S. Army had undertaken to draw up the plan, but decided that a correction was in needed.

I decided to voice my displeasure with Gen. Milburn directly.

Suffering from a cold, the commander was receiving treatment in a command vehicle in a nearby parking lot. Gen. Milburn greeted me with a warm smile and stated he was given a penicillin shot to treat a horrible cold. He proceeded to pour me a glass of whiskey.

I downed half the glass and took out a Soviet pistol from my holster. It was a Soviet officer pistol given to me by one of my officers. I offered the pistol as a sign of appreciation for Gen. Milburn’s work during the counter-offensive at the Nakdong line.

I began to speak about the booklet I had received earlier. Gen. Milburn began to listen intently. I think he noticed by my expression and body language that I was nervous and something was amiss.

“The ROK 1st Division is excluded from the plan to attack Pyongyang,” I started. “I do not understand it. I’m thankful for the U.S. Army’s help in the war, but this is a war taking place in Korea.

“It’s difficult to understand why the ROK Army is being left out of the plan to attack the enemy’s capital.”

Gen. Milburn looked uncomfortable and dumbfounded at my suggestion that changes be made to the plan of attack at this juncture of the game.

In an attempt to convince the general, who was ill and now giving me a blank stare, I began to talk about the Sino-Japanese War (1894-1895) and the strategic success of the Japanese Imperial Army against the Chinese.

I explained that we faced a similar situation and could use my knowledge to our advantage in Korea.

When I noticed that I could not incite a reaction out of Gen. Milburn, I went onto talk about my detailed knowledge of Pyongyang, the place of my birth and where I spent most of my youth.

I was overcome with emotion as I made one last plea with the commander to include the ROK 1st Division in the overall plan.

Gen. Milburn did not speak for a long time. He seemed to be considering what I had just told him.

“General Paik, are you sure you can successfully advance to Pyongyang?” he asked. “The ROK 1st Division’s power is nowhere near that of a U.S. Infantry Division.”

He then pondered the situation at hand before abruptly getting and ordering Chief of Staff Van Brunt to change the attack route of the ROK 1st Division and the U.S. Infantry 24th Division.

He hung up the phone and gave off a slight smile, as if to suggest he liked my persistence.

He wished me luck as he shook my hand.

I returned to the second floor of the building. Chief of Staff Van Brunt was already going over the pages and making changes.

“I will send the new copy to you when it’s done, you can return to your CP [command post],” stated Van Brunt.

I turned down the offer and told him that I’d stay until it was completed.

Van Brunt did not complain once as he made changes to the lengthy booklet.

I stood next to Van Brunt as time progressed. I guess I wanted to make sure that Chief of Staff Van Brunt fully understood Gen. Milburn’s orders that we would be involved in the Seoul offensive and did not make any mistakes in his corrections.