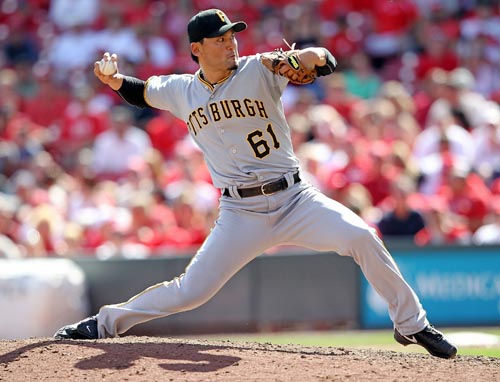 
Pittsburgh Pirates veteran relief pitcher Park Chan-ho earned his 123rd career win, tying him for the most wins among Asian pitchers in the MLB with former Los Angeles Dodgers teammate Hideo Nomo, who last played in the majors in 2008.

In yesterday’s away game against the Cincinnati Reds at the Great American Ball Park, Park entered the game as a relief pitcher in the eighth inning with his team trailing 1-0. Park successfully held off the National League Central Division leaders without a hit. Then the Pirates’ offense delivered in the clutch.

With the bases loaded, Andrew McCutchen hit a three-run double off Reds closer Francisco Cordero for a dramatic 3-1 win.

The milestone win was his first as a Pirate. The 37-year-old Kongju-native was claimed off waivers by the Pirates on Aug. 4 after being designated for assignment on July 31 by the New York Yankees. 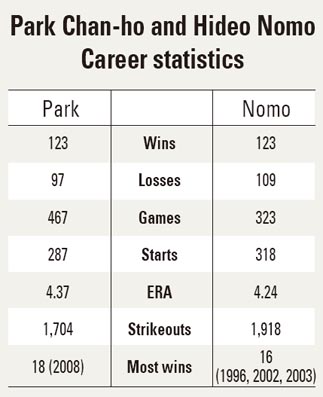 In a career slowed by injuries, things have not come easily and have not quite worked out the way Park would’ve liked over the years.

“Any difficulties and pain I’ve experienced is a result of the personal standards I’ve set for myself,” Park said on his Web site yesterday. “I didn’t have any misfortunes in my life. I merely came up short of my own expectations.”

Park signed with Dodgers in 1994 as an amateur free agent while a sophomore at Hanyang University and became the first Korean player to break into the majors.

His best season came in 2000 when he went 18-10 with a 3.27 ERA and hit two home runs. After being selected for the National League All-Star squad in 2001 and posting 15 wins with a 3.50 ERA, Park cashed in as a free agent by signing a lucrative five-year $65 million deal with the Texas Rangers.

The deal made Park one of the highest paid pitchers at the time but he failed to live up to the contract. Marred by lingering back and right thigh injuries, his record was just 22-23 during his four seasons with the Rangers.

Since leaving the Rangers, Park has been a journeyman pitcher.

After two mediocre seasons with the San Diego Padres in 2005 and 2006, he moved on to join the New York Mets the following season.

After spending significant time in the minors, Park was able to revive his career with his original team in 2008. By going 4-4 with two saves and a 3.40 ERA with the Dodgers, Park showed he was capable of playing the fifth starter role in the rotation as well as being a viable setup man.

Park signed a one-year deal with the Philadelphia Phillies and although he struggled as a starter, he proved to have enough left in him to produce as a setup man.

Park spurned the Phillies at the end of the last season and signed a one-year $1.2 million contract plus $300,000 in incentives with the New York Yankees.

Park is 1-1 with a 4.20 ERA for the Pirates, who sit dead last in the National League Central.