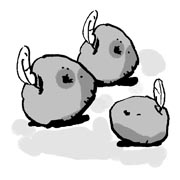 June is the cruelest month - for fruit, that is. After they endure the low temperatures of the winter, with some barely escaping, it is time for them to compete for water and nutrients. Those that lose the competition fall from the trees in a phenomenon known as the “June drop.”

Poet Byeon Hak-gyu wrote of the June drop: “Just like the wandering mountain birds, they cry out and spit blood.”

The June Drop is inevitable for some fruits.

In fact, the fruit may have more to fear form the hands of the farmer than they do from Mother Nature. A good farmer will often do the work of Mother Nature and weed out the smaller fruits to ensure that the bigger ones survive. They cull the crop after planning the ratio of fruits to leaves. But even after the pruning is done, it is still too early for the fruits to feel safe. If the farmer thinned the tree too early or too much, the remaining fruits grow too big. Their cores become too wide and their veins become clogged as if they are suffering from arteriosclerosis.

This year was a hard one for fruit everywhere. As the saying goes, a day of sunshine in May and June ripens five grains and 100 pieces of fruit, but there were not many sunny days in the spring and summer this year. The spring brought unusually low temperatures and a lack of sunlight. Extreme heat and heavy rain alternated throughout the summer. According to the Korea Meteorological Administration, the total amount of sunshine from January to August was 196.4 hours less than the average.

The fruit suffered from rattling chills and high fevers, as though infected with malaria. As if that weren’t enough, the ones that survive the spring and summer have something new to fear: September. Every autumn, the country is hit by a series of typhoons. As Typhoon Kompasu swept the country, it left a trail of uprooted trees and fallen fruits in its wake. And our repulsively long rainy spell has forced the last remaining fruits from their branches. All of this is the result of climate change brought about by global warming. If this continues, we should start calling it what it is - the September Drop.

Yet we shouldn’t be discouraged. Japanese writer Tadaaki Hakoda tells the story of an American farmer in Minnesota in his book, “Sell a Fallen Apple.” Although a hailstorm inflicted great damage on his apple farm, the farmer marketed his fallen apples as being touched by nature and they became extremely popular.

Korean farmers are just as clever. Bruised fruit is not as attractive as whole fruit is but it is still sweet, so some farmers are using the fallen fruit to make preserves and vinegars. This is a process that repeats itself every season. It is the process of turning despair into hope.