For Koreans, a Chanel bag can earn prestige and maybe even a profit

For Koreans, a Chanel bag can earn prestige and maybe even a profit 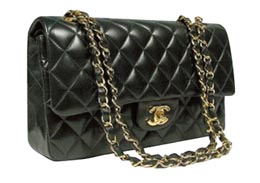 When Chanel raised the retail price in Korea for some of its bags in July, sales should have dipped, according to the economic rules of supply and demand.

“It feels like buying stocks at the peak price, but I just cannot resist it,” said Jenny Kang, a 35-year-old graphic designer, who has the itch to buy. “I know deep down in my heart that it’s not too late to buy it now, because I am pretty sure that the price will go up again.”

One of the reasons Kang isn’t put off by the price rise is that she considers a Chanel bag a fashion statement, a luxury and an investment as well - because in Korea, there’s a buoyant secondary market in Chanel luxury goods.

Chanel’s classic flap bag is far and away the most popular model among Korean women. Some brides request it as part of their wedding trousseau. In 2007, that model sold locally for 2.03 million won. The 129-percent hike of the bag over three years allowed some owners to sell their used bags at prices higher than what they originally paid - after getting a couple of years of status on the street or in the office by carrying it around.

Hundreds of secondhand Chanel classic shoulder bags in various sizes and vintages were sold at FeeLWay, one of the largest Internet seller of preowned luxury goods. In secondhand luxury goods stores around Seoul’s fashion districts of Myeong-dong and Apgujeong-dong, the Chanel bags were displayed in prominent positions.

“I got mine about six years ago, and back then, it was about 2 million won,” said Park Mi-Kyung, a marketing coordinator living in Seoul. “It was a big splurge, and I didn’t really have occasions to carry it around. A few months ago, I sold it to a secondhand luxury goods store and they paid me 2.2 million won. Not bad, isn’t it?”

Chanel prices have risen to reflect changes in exchange rates over the past three years. The price hike in July, however, was for a different reason, a Chanel Korea official said.

“We did not raise prices of all models of handbags,” she said. “We only adjusted the Reissue 2.55 and the classic lines in order to position them differently. They are fashion icons, and it was a worldwide policy to redefine their prices and positions.”

She, however, refused to say whether sales have increased - or declined - with the new pricing strategy.

Still, the luxury fashion house’s effort to reposition some of its bags as “fashion icons” with higher price tags appeared to pay off. When the July price hike was announced, some customers who had plans to invest in Chanel bags rushed to buy them in advance, industry sources said.

Kang, the graphic designer, said the price increase made her even more eager to buy.

“Because of the expensive price tag, it almost became an object of status now, and I know I sound silly, but I just can’t help wanting it so badly,” she said. “Oh well, maybe in a few months I will just buy one and end this agonizing debate about how much is too much.”

A 30-year-old fashion designer said she is well aware of the prestige of owning a Chanel, particularly in her industry. “But I am young, and I don’t have millions of won to buy a bag,” she said. “So I bought a used bag from a secondhand dealer. Mine cost about 2.5 million won, but a [new Reissue 2.55] is sold for about 5.6 million won at department stores. And people don’t have to know mine is a preowned one.”

At Internet social network sites for women concerned with fashion, users exchange tips on how to buy real Chanel bags - not the counterfeits found in Itaewon and elsewhere - for the cheapest price. Recommendations of buying them from France or paying with discounted department gift certificates were popular.

Some women even confess that their “yearning for a Chanel bag” has gotten out of control, while others give conservative advice, telling their Net friends to “make a bank savings account and deposit money month by month rather than just dashing to a department store and buying one with a credit card.”

Others said they couldn’t understand the new obsession with Chanel bags. “It’s the same bag from years ago, and I cannot understand why it was suddenly so expensive,” said Chris Yun, a banker. “I would rather spend the money on other investments such as buying stocks. Five million won for a bag? Not for me.”

Kan Ho-sup, a designer and professor of fashion at Hongik University, explained the urge to buy Chanel bags in terms of fashion psychology. “It’s the brand identity that makes people want to buy it,” said Kan. “The design of the quilted classic bag did not change for decades. Even from afar, people will recognize a Chanel bag. The price may be high, but you would want to own one because of its brand power, the ever-lasting value of the design, and most importantly, what it does for your self-esteem.”

Kan disagrees with criticism that Chanel raised its prices unreasonably. “In all capitalist societies, social status is somewhat linked to the prices of goods. For example, there are first, business and economy class tickets for an air flight,” he said. “The most important thing about a fashion house is inspiring people to want to own its goods even 100 years later and the pricing policy is just a part of its strategy.”

And many women - not just Koreans but from around the world - will agree. In a contribution to the New York Times, Mary-Kate Olsen, an actress admired by many women for her fashion sense, wrote about her loyalty to Chanel’s classic handbag.

“The chain-handle bag is the perfect accent to almost any combination I come up with,” she wrote. “I look at everything with a designer’s eye, but I wouldn’t change a thing about this bag. I think that’s why it’s a true classic”.