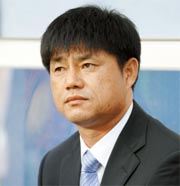 There is no shortage of Korean clubs in the Asian Football Confederation Champions League quarterfinals. A record four K-League clubs are set to play in the quarterfinal first-leg matches tomorrow night.

Suwon has been on an impressive surge since Yoon Sung-hyo became the club’s new manager in June. Under Yoon’s new system, Suwon went on a nine-game unbeaten streak of seven wins and two draws before losing to Jeju United - the team with the best record in the K-League - 3-0 over the weekend.

Shin Tae-yong, who took over as manager of Seongnam last season, has been equally impressive.

Shin took his club to the K-League Championships finals and the FA Cup in his first season before coming up short against Jeonbuk and Suwon, respectively.

Aside from the managerial tactics and the talent at their disposal, field condition may also play a key role in how the crucial first-leg match is played.

With a humid and dry summer followed by unpredictably high amounts of rainfall, field conditions around Korea have been at their worst of late.

“Even recreational league players don’t play on such field conditions,” Yoon said regarding the poor field conditions at Tancheon Sports Complex after a scoreless draw on Sept. 1. “What we played today wasn’t football - it resembled rugby.”

The Pohang Steelers will attempt to become the first club from the Far East to successfully defend its AFC Champions League title against Zob Ahan at Foolad Shahr Stadium in Fooladshahr, Iran.

Pohang is a drastically different club from the one that won the Champions League last season. Gone are manager Sergio Farias and imported talents like Denilson Neves and Stevica Ristic. Pohang’s experiment with Brazilian manager Waldemar Lemos ended in a failure and assistant coach Park Chang-hyun was promoted to replace him in May.

Former national team forwards Seol Ki-hyeon and Lee Jin-ho - who were acquired in a swap for No Byung-jun with Ulsan - will attempt to lead Pohang’s attack against Zob Ahan.

Defending K-League champions and 2006 AFC Champions League winners Jeonbuk Motors take on the Saudi club Al-Shabab at Jeonju World Cup Stadium. Jeonbuk has no shortage of talented forwards as Eninho leads the K-league with 13 goals and Lee Dong-gook and Krunoslav Lovrek each have eight goals apiece.