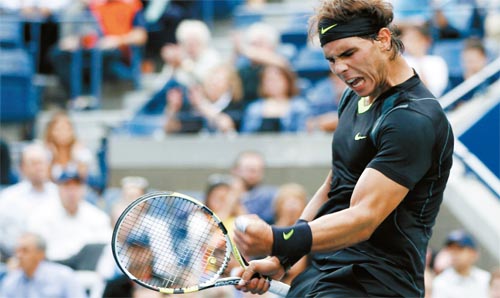 Rafael Nadal of Spain celebrates a point during his match against Serbia’s Novak Djokovic in the men’s final at the U.S. Open tennis tournament in New York on Monday. [REUTERS/YONHAP


NEW YORK - Rafael Nadal sealed his place among the tennis greats on Monday, beating Novak Djokovic to win the U.S. Open and complete his collection of grand slam titles.

With eight grand slams already under his belt before the tournament began, the Spaniard was already assured a spot in the sport’s elite, but conquering New York elevated him to a whole new level and left no doubts about who is the No. 1 player in the world.

Nadal overcame the distraction of a two-hour delay and losing his first set of the tournament to beat the brave but ultimately outclassed Djokovic 6-4, 5-7, 6-4, 6-2, after three hours and 43 minutes of unrelenting tension at Arthur Ashe Stadium.

“That’s more than what I dreamt,” Nadal said at the trophy presentation. “It’s just amazing to be here in this final, just to arrive in this final. To have this trophy here in a few seconds, with my hands, is going to be unbelievable.”

Djokovic, who had beaten Roger Federer in an exhausting five-set semifinal Saturday, expelled any doubts about his fighting qualities with a courageous performance, fending off an astonishing 20 break points during the course of the match. But the pressure eventually wore him down.

“I would first like to congratulate Rafa and his team for an amazing tournament,” Djokovic said. “Right now he’s the best player in the world and he absolutely deserves this title. Well done again.”

After losing the second set on a sloppy service game, Nadal ran away with the last two - clinching the victory when Djokovic hit a forehand wide - and collapsed on the court as the enormity of his achievement sank in.

He warmly embraced Djokovic at the net then dropped to his knees as the center court rose as one to applaud him.

When he was handed the trophy, he raised it above his head, as thousands of flashbulbs lit up a perfect New York night.

Nadal had already won the Australian Open, French Open and Wimbledon singles titles and by adding the U.S. Open he joined Fred Perry, Don Budge, Rod Laver, Roy Emerson, Andre Agassi and Roger Federer as the only men to win the four majors.

At 24, Nadal is the third youngest to achieve the feat and his best may be still to come. Nadal became the first man since Laver in 1969 to win the French Open, Wimbledon and U.S. Open in the same year and he now has the chance to hold all four concurrently if he can add the Australian Open in January.

With nine grand slam titles in total - five French Opens, two Wimbledon, one Australian Open and now one U.S. Open - he climbed to seventh place on the all-time list and Federer’s record of 16 could be within his reach if he stays healthy.

The U.S. Open, played on a hard court, had always been Nadal’s biggest hurdle because of the wear and tear it puts on his troublesome knees. His great rival Federer had won five times but has come up short in each of the last two years and at 29, his stronghold on the event appears to be slipping.

Nadal arrived in New York this year fresher than ever and armed with a new and improved serve that enabled him to sail through his opening matches without fuss.

Djokovic has always been at his best on hard courts. He made the final at Flushing Meadows in 2007, losing to Federer, then he won the Australian Open the following season.

He fought off two match points to beat Federer in the semifinals Saturday and got a lucky break when rain washed out Sunday’s final, giving him an extra day to rest. Mother Nature helped him out again Monday when the final was halted as a thunderstorm arrived midway through the second set, forcing the players, officials and more than 20,000 spectators to run for cover.

Djokovic lost the first and then gave up a 4-1 lead in the second but battled back to 4-4 when play was halted.

When they returned to perfect conditions, he caught Nadal napping and snatched the second but it was never going to be enough against a man with destiny in his sights.