No Olympic illusions for Japan after medal rush

No Olympic illusions for Japan after medal rush 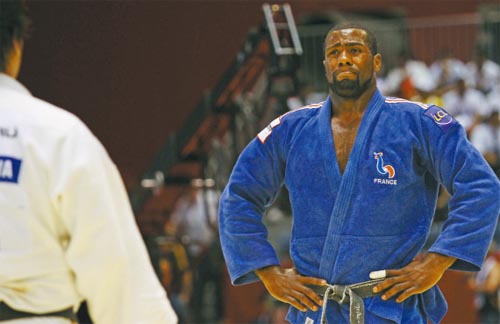 Teddy Riner of France looks at Japan’s Daiki Kamikawa, left, after Riner lost a decision in the gold medal judo match in Tokyo on Monday. [AP/YONHAP]


TOKYO - Japanese judo chiefs have warned against mistaking the country’s gold-medal rush at the world championships for a promising preview of the 2012 London Olympics.

Japan roared to a record 10 world titles at the event that ended on Monday in Tokyo with newcomer Daiki Kamikawa beating four-time world champion Teddy Riner of France in a 2-1 decision in the men’s showpiece open-weight final. Japan’s men wrapped up four out of eight gold medals on an offer to restore pride in their home-grown sport, bouncing back from an unprecedented title drought at last year’s championships in Rotterdam, the Netherlands.

They are now set to improve from their all-time Olympic low of two medals - both gold - at the 2008 Beijing Games. But the success has been largely attributed to hometown advantage, a new rule to ban wrestling-like tackles and an increase in the quota of entries by a country in each category, generally from one to two. The open class took four. The one-competitor limit is still enforced by the International Olympic Committee.

Riner, failing to become the first man to accumulate five world titles, kicked an advertisement board, shedded tears on the podium and told reporters he had been deprived of his gold medal by a “bad decision.”

“This is Japan. All delicate decisions were in favor of Japan,” Japan men’s coach Shinichi Shinohara told Japanese media. “It won’t be like this [at next year’s championships in Paris].”

Japanese women grabbed six golds and their coach Ryuji Sonoda said: “It would have been strange if we didn’t produce results.”

Japan’s No. 2 female heavyweight Mika Sugimoto won the over-78 kilogram (172 pounds) and open titles by beating China’s Qin Qian - in the absence of compatriot Tong Wen, who dominated the heavyweight since 2005 but was banned for doping in May.

The increased quota resulted in victories by normally second-tier fighters from the wealth of Japanese talent. The women’s lightweight contests in the 48 kilogram and 52 kilogram ended in all-Japanese finals in which defending world champions Tomoko Fukumi and Misao Nakamura were upset by pressure-free teammates.

“This won’t happen in the Olympics where only one can compete,” warned Kaori Yamaguchi, who became the first Japanese women’s world champion in 1984.

“The prestige of world championship titles has definitely gone down,” she told the business daily Nikkei about the expanded quota that will remain in place at next year’s championships.

While Japan celebrated as their all-time gold medal haul passed the historic total of 100, the championships also sparkled with non-Japanese feats.

In his first event, Riner won a third straight over-100 kilogram title while in the men’s 90 kilogram, Georgian-born Ilias Iliadis won a maiden world title for Greece after becoming the first Greek Olympic judo champion in Athens in 2004.