Unwanted in own land, Iverson may go to China

Unwanted in own land, Iverson may go to China 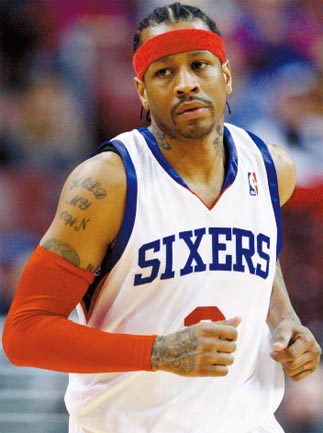 PHILADELPHIA - Unwanted by the NBA, Allen Iverson is considering playing in China.

Gary Moore, Iverson’s personal manager, said Iverson has not been contacted by any NBA team with training camps set to open in less than two weeks. Moore said there is “legitimate interest” between Iverson and a team in China to work out a deal. Moore did not know the team’s name and was vague on details.

“We’re very astonished, to say the least, that not one team has contacted us with any interest,” Moore said. “I just don’t understand it.”

Iverson played three games for Memphis last season before he returned for a second stint with the Philadelphia 76ers. He averaged 13.9 points for the Sixers before he took a leave of absence in March because of family issues.

In his prime, Iverson boasted top-selling jerseys and sneakers and was a global superstar. His popularity never waned even as his production dipped - Iverson was voted an Eastern Conference All-Star starter last season. Iverson would be a drawing card overseas, and might see a familiar face in former NBA All-Star Stephon Marbury. Also discarded by the NBA, Marbury played last season for Shanxi Zhongyu in the Chinese Basketball Association.

Iverson is 17th on the NBA’s career scoring list with 24,368 points over a 14-year career with Philadelphia, Denver, Detroit and Memphis. He won the MVP in 2001 when he led the Sixers to the finals.

Iverson’s agent, Leon Rose, did not immediately return messages for comment on Monday.

Iverson was the No. 1 overall pick in the 1996 draft and spent his first 10 seasons in Philadelphia. He was a four-time scoring champion, averaged 26.7 points and never won a championship.

“What has Allen Iverson done to not warrant interest in him?” Moore said.

He was hobbled by an arthritic left knee and constantly needed it drained last season. Iverson also famously clashed with his coaches, notably Larry Brown, but returned to Philadelphia humbled, reserved and more accepting of team play. He took a leave of absence in March because of family issues.

Moore said Iverson is healthy and works out in Atlanta prepping for a comeback.