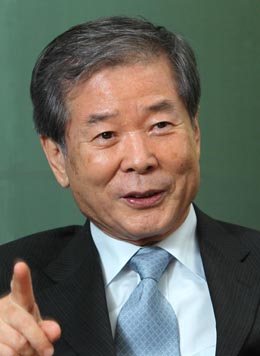 Chairman Hong Doo-pyo of JIBS, the local TV station of Jeju Island, is a 50-year veteran of Korean broadcasting.

In 2002, Hong founded the last terrestrial TV channel, JIBS, and is still active in the industry. He was awarded a Broadcasting Achievement Award earlier this month.


Q. Fifty years in the broadcasting field is very long time. What are your thoughts on receiving the achievement award?

A. I have seen a worthy 50 years of turbulence, change, honor and development. After half a century, broadcasting still awes me. When terrestrial broadcasting first started in 1961, there were 14 colleagues with me. A third of them have already passed away. I hope to share this honor with those who opened the door of Korean broadcasting with me.

What was your most memorable event?

Dongyang Broadcasting Corporation closing on Nov. 30, 1980. As many remember, TBC made a great contribution to the development of Korean broadcasting. However, it had to close down shortly before the arrival of color TV due to the Fifth-Republic regime (of Chun Doo Hwan). Pulling down the TBC flag on the roof of the JoongAng Ilbo building as the last president was heartbreaking.

Any other memorable events?

I cannot forget Dec. 31, 1961, when I witnessed the first transmission signal of KBS as one the first recruits selected by the Ministry of Culture. It was the last day of the year at 6 p.m. when the “cue” sign was given. I can still remember that the roof leaked in the studio. I also remember the improvement in the financial situation of KBS as an executive. After the collection rate for the license fee went up from 50 percent to 94 percent, the quality of the programs also rose.

There is a saying that being president is a normal job description for you. (Hong has been president of KBS, the JoongAng Ilbo, TBC, Korea Broadcast Advertising Corporation, and Korea Tobacco & Ginseng).

I give it my best each time when I land an important position. I feel that I had both opportunities and luck on my side. But I never wanted such positions beforehand. I believe that hard work and sacrifice always pays off. I have been evaluated as a CEO with good crisis management and positive drive. Such appraisals have allowed me to take the role of president on many occasions.

You helped established TBC and served as its last president. How do you recall those times?

TBC, with its bright and warm image, led the TV era. Even with competition among broadcasting corporations, it accomplished a historic viewership rate of 43.5 percent.

This was because of the strength of its outstanding content. It was innovative in both format and substance with the national drama “Assi” (Your Lady) and the “Show Show Show” variety program. People in their mid-40s or older were familiar with TBC and still feel great nostalgia and sentiment toward it.

In January, the Truth and Reconciliation Commission decided that the forced merger of media in 1980 was an illegal act to bolster authoritarian government (of Chun Doo Hwan).

The judgement came late, but it is no doubt a correct one. When times change, media law is reformed and broadcasting can take its deserved place. TBC was unjustly merged and it should still exist. Errors in history and social justice should be corrected for the future development of national identity.

Which direction should terrestrial broadcasting go?

It should be considered alongside electricity, water supplies and gas as a public utility. It should not be just another channel among the sea of channels.

What role do you think terrestrial broadcasting can play?

Broadcasting, especially TV, is like a department store that produces, distributes and services products. It is a difficult and complicated process. I especially feel that producers and journalists should retain their independence. As society becomes complex and diverse, it becomes more difficult for broadcasting to keep an objective stance. This is why broadcast become involved in fairness disputes. Sometimes broadcasts have committed errors because of external factors. However, it is the duty of broadcasting to retain fairness and efficiency.

You have been an influential president in broadcasting and newspapers. There is much discussion about newspapers entering the broadcasting business. Do you have any advice?

General-program channels that will begin operation later this year represents a model for the merger of newspapers and broadcasting. The diversity and depth of newspapers would help support TV journalism. But there are concerns. Managing newspapers and broadcasts are different in essence. Once general-program channels are introduced, the next five years of managing them will be extremely difficult. Stable finances and competitive content are necessary. Simply relying on political factors to enter the business is dangerous.

What are your forecasts for broadcasting over the next 50 years?

We have received great social support. The current broadcasting industry is in a transition phase with digital conversion, media fusion and the emergence of new media. As an expert in broadcasting, I will contribute to these trends in some ways. I wish to share the knowledge, experience and management skills that I have gained with younger generations. Earlier, you mentioned my jobs as president. But I feel my job is “work.” Working is my job and it is extremely worthwhile.