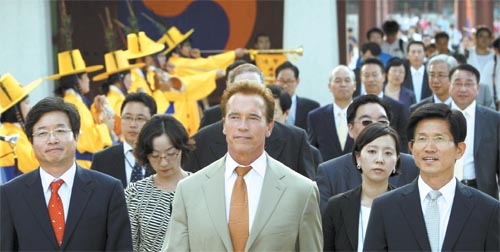 
Arnold Schwarzenegger, the governor of California and star of the “Terminator” film series, came to Korea yesterday on the invitation of Gyeonggi Governor Kim Moon-soo.

Schwarzenegger went straight to Hwaseong Fortress in Gyeonggi after arriving at Seoul Air Base at 3:30 p.m. to sign a memorandum of understanding to strengthen cooperation between the two regions by increasing technology exchanges, investment and trade.

“Over 350,000 Korean residents live in California, which is also the place where the largest number of Koreans live abroad,” Governor Kim said in a greeting message.

Schwarzenegger is on an Asia trip to find the most suitable high-speed rail developer to link San Francisco and Los Angeles, a project worth $42 billion. He also visited Japan and China. Schwarzenegger said the California government will invite bids on the project in a few months.

Schwarzenegger will meet President Lee Myung-bak and ride the KTX bullet train today. From Korea, he returns to the United States.