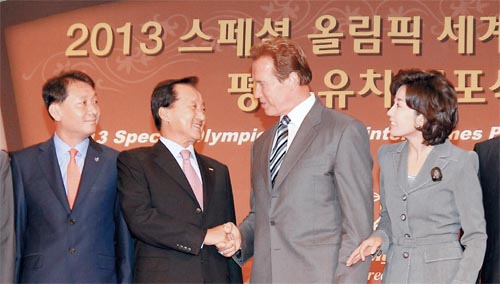 
With high profile figures like Nadia Comaneci and Arnold Schwarzenegger in attendance, Pyeongchang, Gangwon, was officially announced as the host of the 2013 Special Olympics World Winter Games.

In place of Timothy Shriver, the chairman of the board of directors of Special Olympics International, its Vice Chairwoman Comaneci signed an official agreement with Na Kyung-won, a Grand National Party lawmaker and chairwoman for the Preparatory Committee of the 2013 Special Olympics.

“Even though many of our athletes are not the fastest or most talented, they train and compete and can match any athlete on any playing field,” Comaneci said.

“Congratulations Korea, your heart is big and beautiful as the athletes who will compete at the Special Olympics.”

A total of 2,500 athletes from 105 nations are expected to compete in seven winter sporting events in Pyeongchang in January 2013.

“I first became aware of the Special Olympics in 1968 but became embarrassed over the years that Korea had not hosted the event,” Na said. “This is only the beginning and we have a lot of work ahead of us.

“But I hope the 2013 Special Olympics can serve as a global event in which perceptions can be changed and Korea can serve a significant role in the global community.”

As the brother-in-law of the chairman, Schwarzenegger - who is in Korea on a trade mission - chimed in and gave a ringing endorsement of the international event before participating in a ceremonial passing of the torch with Na.

“Anyone who considers those who are intellectually challenged any less are making a big mistake,” Schwarzenegger said. “It’s important to try and lift them up and help them to soar like eagles. It’s our responsibility to create the winds.

“Korea got the Special Olympics because it provides the most winds. I can’t wait to see Korea hold another successful event. I promise you now, I’ll be back.”

Pyeongchang is continuing to work on its world-class facilities as it bids for the 2018 Winter Games - its third consecutive bid.

Lee Kwang-jae, the governor of Gangwon stressed the significance of the winning Special Olympics bid and the positive effects it can have on the 2018 Winter Games.