Entertainer gambles with his career

Entertainer gambles with his career

Entertainer Shin Jung-hwan, 35, the host of three popular national television shows, was fired from all three shows yesterday, following allegations that he ditched work to go on a gambling spree in the Philippines, where he is rumored to have lost millions of won.

The Seoul Supreme Public Prosecutors’ Office said Tuesday that it had launched an investigation of Shin.

When Shin didn’t show up for work last week, it was believed that he had once again indulged in his well-known penchant for gambling, which is illegal in Korea.

This is not the first time the entertainer has faced allegations of illegal gambling.

In 2005, Shin paid a 7 million won ($6,363) fine after he was caught gambling. He was also sued by an acquaintance who said Shin failed to repay the 180 million won he borrowed to gamble at a casino in Gangwon Province.

Last week, as rumors continued to circulate, Shin, who was staying in Cebu with friends, posted a statement on his fan site that said he had contracted dengue fever and had been hospitalized for days.

He also released a photo of himself lying in a hospital bed with wires attached to his chest. In the statement, posted Sept. 9, Shin also criticized the media for acting like a “lynch mob” and “accusing an innocent person without any proof.”

But later that evening, SBS’s “Nightly TV Entertainment” reported that the photo had been manipulated. 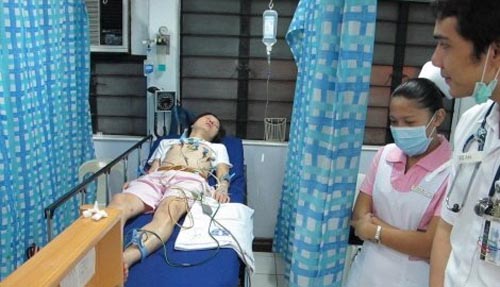 With increasing speculation about his failure to show up for work, Shin Jung-hwan released this photo of himself in a hospital in Cebu, which was later reported to have been manipulated. Shin claimed to have dengue fever but is suspected of taking a gambling trip. [JoongAng Ilbo]


Doctors and nurses at the hospital interviewed on the program said that Shin was resting but did not have any symptoms of dengue fever.

Yesterday, Shin was fired from all three of his TV shows, which air on the nation’s three major networks - SBS, MBC and KBS. In addition, Shin’s finances have reportedly been frozen by SBS, based on his history with gambling. It was also reported that he had left Cebu for Macau.

In response, IS Entertainment, Shin’s management agency, released a statement later in the day saying that Shin has no plans to return to Korea for a while, but did not give any reason for why he was extending his stay abroad.

Aside from the consequences facing the entertainer, the Shin case has turned a harsh spotlight on gambling addiction and the increasingly long list of celebrities with gambling problems.

Lee Seong-jin, a former member of the now-defunct boy band N.R.G., was arrested in March for failing to repay a 20 million won debt to a friend and using the money to gamble at a casino in Gangwon Province.

Shin Hye-sung, a member of the band Shinhwa, had to pay 10 million won in fines after he was caught gambling overseas last October.

“Gambling addiction is very complicated and very hard to overcome,” said Lee Joo-young, an official at the Korea Institute of Mental Health in Incheon.

Lee added: “Gambling addiction is closely related to mental health. People who have depression or other mental health problems often seek the thrill of gambling to deal with their problems. People who are addicted to gambling also tend to be impulsive, or they just hate to lose.”

Experts say that celebrities may be at higher risk for gambling addiction.

“Fame and their unstable status as celebrities is extremely stressful, which makes them seek ways to escape. Some choose to escape by gambling,” said Hwang Sang-min, a professor of psychology at Yonsei University.

Meanwhile, an official with the prosecutors’ office in charge of investigating gambling cases said Shin is likely to face a heavy punishment.

“Although we have simple guidelines on gambling - including fines of up to 20 million won or prison terms of less then three years - the punishment is always decided on a case by case basis,” the official said. “This is the third time Shin has been caught gambling. It’s not going to be easy this time.”