Efforts to end overwork not working

Efforts to end overwork not working 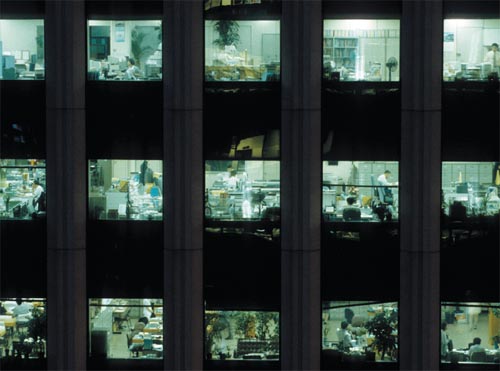 Night is day in central Seoul as workers get stuck in their offices. [JoongAng Photo]


Punching out at 5:30 p.m. sharp has never been possible for Song, a 35-year-old employee of a midsize engineering company in Yeouido, central Seoul. Although his official working hours are from 8:30 a.m. to 5:30 p.m., nobody leaves the office on time.

“Since my wife works, we take turns picking up our baby from a day care center. But I’ve never left the office at 5:30 p.m. I linger in the office for about 30 minutes and leave at around 6,” said Song, who asked to only be identified by his surname.

Song’s company offers a variety of fringe benefits such as paying for children’s tuition fees from kindergarten up to college. But the company, like other Korean companies, has an unspoken rule when it comes to working hours.

“One day I ran across a high-ranking official in the elevator on my way home. He asked me why I was leaving the office early. He made me speechless because it was ten past 6 - 40 minutes past official working hours.”

Koreans’ long working hours have been blamed for a number of social ills, from the low birthrate to a high industrial accident rate. In fact, Koreans currently work longer than anyone else among the Organization for Economic Cooperation and Development nations.

Now, the government has begun introducing measures to curb working hours in an effort to shake the disgraceful label that has been tied to so many negative social consequences.

Experts also believe lower working hours would bring more flexibility to a tough job market, because companies would be forced to hire part-timers to offset lost productivity from a slightly shorter working day.

One proposed measure in particular - a plan proposed in early June by the Economic and Social Development Committee, which sets labor policy - aims to slash the average annual working hours of Koreans by up to 10 percent by 2020, meaning workers will work about 1,800 hours instead of 2,200 hours per year. This would bring the average workday more in line with OECD standards.

The labor policy body said it reached the agreement with the government, management and unions after yearlong discussions.

“The Ministry of Employment and Labor comes up with details to put the agreement into practice, and we play the role of a supervisor,” said Cho Kyu-sik, an assistant administrator working for the committee.

Launching a national organization made up of experts from different interest groups to fill in the policy details is one part of the agreement.

But so far, the plan is just a proposal. If the agreement is ever implemented, Koreans would work about seven and a half hours, instead of the current nine hours, per day.

As of 2008, Koreans worked about 2,256 hours per year on average, far higher than the OECD average of 1,764 hours. Even Japan’s workforce only puts in 1,772 hours at the office on average in the same year.

The Labor Ministry, however, has been slow to implement practical measures that would modernize outdated office cultures. Neither action plans nor the national organization stipulated in the proposal has been launched over the past three-month period.

“Nothing has been decided yet. We’re still in the process of planning,” said Woo Ji-hyun, an official at the ministry.

In addition, no incentives or penalties are given to companies for reducing or extending working hours.

Experts say any plan to reduce working hours would be futile if no mechanism is in place to reward or punish corporations.

“It’s impossible to expect companies to voluntarily lower working hours. Over the past 200 years, no companies did so, even in advanced countries such as the United States or Britain,” said economics professor Jeong Seung-il of Kookmin University.

“Unless the plan is legally binding, the government can’t solve this problem. Employees who work overtime for extra pay should receive penalties as well,” said Jeong, co-author of “Quedonanma Korean Economy.” In the book, Jeong examines side effects brought on by an overworked populace.

The economics professor suggests that if blue-collar workers want shorter workdays, they should be penalized in some way for choosing to work overtime. He explained it like this: Assembly line workers willing to work between 10 p.m. to 6 a.m. should be penalized because companies are bound to pay time-and-a-half to those who work overtime; laborers competitively work extra in many of the nation’s assembly lines.

Jeong is in favor of legislating limits to the number of hours workers are allowed to work in one month. He cites Germany and Switzerland as models. “Korean workers shouldn’t be allowed to overwork for more than a certain number of hours per week,” he said.

“Due to the nature of this problem, this is not something you could bring change to in a decade,” Jeong firmly said.

Something else that needs to change, experts warn, is the mind-set of older-generation CEOs.

A survey conducted in June by Standard Chartered Korea on 1,000 Korean workers showed that 63.7 percent of respondents worked overtime and 78.3 percent had difficulties in juggling home life and work. Asked why they felt overworked, 76.2 percent blamed it on their workload while 24.5 percent said they wanted to impress their bosses or colleagues.

“After 6, many people frantically type on their keyboards, including me. Some of us are probably hurrying to finish work, but I bet many are just killing time by chatting on Nate [an online instant messenger] because they don’t want to be labeled as disloyal by their bosses,” said Park, 29, who works for a trading company in Seoul. He also asked to only be identified by his surname. 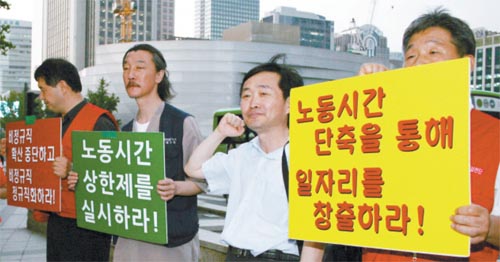 
Overworking as a virtue

Experts said that the reason why Korean employees do not leave the office after their official working hours is due to fear of not appearing virtuous.

“As we went through rapid economic development, people tended to think of overworking themselves as something virtuous and desirable, and that still prevails among older generations,” said researcher Lee Seong-tae from the state-run Korea Culture and Tourism Institute.

Korea is one of the few developed countries in the world that has not implemented daylight savings time.

The workforce has resisted it, because in many companies, leaving the office before sunset is dissuaded. Daylight savings time, if employed, would essentially add an hour to many people’s workday.

Lee of the KCTI added that Korean labor laws mirror society’s perceptions of the relationship between work and holiday.

“A right to use allotted holidays for American employees is guaranteed by the law, but not in Korea. There is an article in Korean law stating that companies are able to adjust workers’ holiday schedules at their discretion,” Lee added.

The value Korean society puts on work in many cases can preclude people from taking more than a one-week vacation.

The Korea Employers Federation said Koreans only took off 4.1 days on average this summer, which is far shorter than a week.

This is one reason Lee Charm, head of the Korea Tourism Organization, has launched a campaign to promote taking a two-week vacation. Aside from better mental health that comes from more time away from the boss, more than doubling the number of days people take off in the summer would give the nation’s tourism industry a big boost.

Lee, who was born in Germany and became the first foreign-born president of a major public firm in Korea, has been encouraging his employees to take two-week vacations since his inauguration in July 2009. He has frequently told reporters that two-week vacations promote the nation’s tourism industry, as well as improve work efficiency.

Lee told one local newspaper earlier this month that Koreans seem to feel guilty about using their holidays.

Yang, from Ewha Womans University, said Koreans feel such guilt because of a phenomenon he calls “groupism.”

“Me comes before others for people in Western countries,” he said, “but it is starkly different for Koreans. Korea is based on ‘groupism.’ Others come before me, which makes Koreans reluctant to leave the office before their colleagues.”

Experts insist that working yourself almost to death should not be considered a virtue. Uprooting the overwork-virtue connection is essential to curbing negative externalities associated with overworking.

Type in “death from overwork” in any Korean Web portal and a string of search results show cases of people who died because they worked too much. Some law firms even specialize in deaths from overworking. Hanul Professional Law Corp. is one of them. According to the Korea Occupational Safety and Health Agency, heart-related diseases and cerebral hemorrhage have close connections with overwork. The agency added that people who die from such diseases is on the rise and the agency has adopted strict guidelines on granting compensation to families of the deceased from 2008.

The country’s long working hours have also been detrimental to the birth rate, say experts.

Because women have a hard time juggling Korea’s long working hours with pregnancy and motherhood, many women either leave the workforce or choose not to have children.

“I was overworked almost everyday. I tried in vain to have a baby for nearly four years. After I quit, I became pregnant just months later,” said a mother who goes by the nickname Sevenmom in an online community named “Momsholic,” where more than 1.22 million mothers exchange parenting information.

Minister of Gender Equality and Family Paik Hee-young pointed to rampant overwork as a major factor in the country’s low fertility rate in an interview with Yonhap News Agency in July.

A reduction in working hours won’t come without a fight.

The Korea Employers Federation strongly opposes implementation of a substitute holiday system. Under such a system, workers would get time off in lieu of statutory holidays that fall on a weekend.

The National Assembly Research Service in March released a report examining the merits of the substitute holiday system. Under the proposed system, the workday following a statutory holiday that happens to fall on a weekend would be designated as a substitute holiday.

The substitute holiday system is used in some countries including Australia, Japan and the United States.

Not surprisingly, employees, some experts and groups, including the Korea Culture Tourism Institute, welcome the system because they believe it would enhance the employees’ quality of life as well as boost consumer spending. A survey conducted by the KCTI in March reported that 76.7 percent of employees agreed with the substitute holiday system.

Corporate leaders, on the other hand, say it would burden enterprises with additional costs amounting to 1.4 trillion won ($1.2 billion) because they would have to pay employees a bonus to work on a holiday, otherwise they would lose output from a day’s work.

Other critics of the Economic and Social Development Committee proposal, to slash working hours up to 10 percent, say it is merely window dressing.

With no practical plan from the central government, liberal groups such as the Korean Confederation of Trade Unions have criticized the 10 percent goal. The group says it was announced only to impress world leaders before the G-20 Summit that will be held in Seoul in November.

The most recent government initiative to boost the birthrate by lowering mothers’ working hours has drawn scorn from working moms.

The central government on Sept. 10 said it will enable working mothers to work fewer hours compared to their peers as a way to cope with dangerously low fertility rates.

“Can we? I don’t think so. It’s absolutely impossible to do so,” said Kim Yun-jeong, 31-year-old working mother, who has a 16-month-old baby.