Ferguson gamble backfires in a stalemate

Ferguson gamble backfires in a stalemate 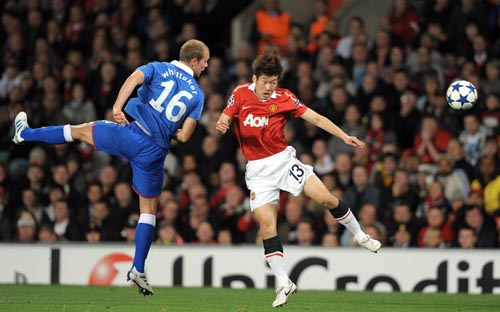 Manchester United’s Park Ji-sung, right, and Rangers’ Steven Whittaker battle for control of the ball in a yesterday’s 0-0 draw. [FP/YONHAP]


MANCHESTER, United Kingdom - Sir Alex Ferguson made 10 changes to his Manchester United squad against Rangers yesterday - including bringing back Wayne Rooney - and paid the price with a 0-0 draw in their Champions League opener at Old Trafford.

To add to the cost of the result, United winger Antonio Valencia left with a fractured ankle in the second half after an innocuous-looking challenge.

Ferguson created a stir even before kick-off, making 10 sweeping changes to the United line-up that drew at Everton on Saturday, although two of those alterations saw the return of Rooney, rested for the weekend, and injury-prone defender Rio Ferdinand. Park Ji-sung started at left wing and played 76 minutes before being substituted for Michael Owen.

Still, the fact that the United manager was clearly choosing a team with one eye upon the weekend Premier League fixture with Liverpool was always likely to be perceived as a calculated gamble and little that occurred over the opening 45 minutes at least, altered that view.

“The criticism will be why didn’t I play a stronger team,” Ferguson said. “I think I played a very strong team. Eight of them played against Chelsea in the Community Shield.

“It’s a terrific squad and there was no problem playing them.”

“They could make 20 changes and still have quality,” Weir said. “When you see Ryan Giggs coming on then that shows you the strength in depth.”

The first half offered little in the way of entertainment or goal threat and, indeed, the most noteworthy incident came late in the period and involved Rooney, who appeared to twist his ankle painfully as he ran to close down Steven Davis. Fortunately for United, after a few minutes testing his ankle, Rooney was fit to continue.

But his impact on the first period was negligible. On one of the few occasions when the visiting defense allowed him a sliver of space, Rooney opted to pass to teammate Javier Hernandez when the better option would have appeared to have been to shoot. The effort was blocked and a rare United foray came to nothing.

Darron Gibson, called into the center of United’s midfield, unleashed two characteristic long-range efforts, the first of which from 25 yards whistled narrowly past Rangers’ right post. The fact that Rangers goalkeeper Allan McGregor was booked as halftime approached, after being warned a number of times for time-wasting, summed up the Scottish team’s approach, which had proved far too dogged for a frustrated United to break down.

The second half opened with Gibson launching another speculative long-range attempt that cleared McGregor’s goal by some margin and Rangers, playing with Kenny Miller as a lone forward, were clearly in equally dogged mood.

Indeed, the Rangers even responded with a rare, promising attack of their own as the busy Steven Naismith chipped in a cross from the left with which Sasa Papac almost made contact before it was gathered easily by United keeper Tomasz Kuszczak.

The injury to Valencia brought Ryan Giggs into the fray and, following the lengthy delay, finally seemed to breathe some life into United. Giggs made a couple of threatening bursts, one of which in the 70th minute resulted in a cross that Rooney headed disappointingly wide.

The England center-forward was clearly growing frustrated by the events and he petulantly grabbed the shirt of Maurice Edu then bundled into goalkeeper McGregor.

An attempted chip, after 77 minutes, at least demonstrated Rooney was still trying and thinking of ways to break down the massed Rangers ranks but the effort offered no problem for McGregor.