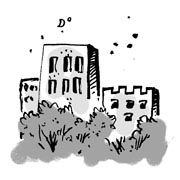 In the 1970s, the bullfrog was regarded as a miracle food. It not only helped farming households increase their income, but it also became a source of protein for people who could not afford to eat well after a poor harvest.

The amphibian became popular when it was discovered that its proliferation was destroying the ecosystem. To resolve the problem, the government launched a bullfrog eradication campaign and cabinet ministers even encouraged people to eat bullfrog dishes at food tasting events, saying, “It is very good for men.”

But just as suddenly as they had appeared, the irksome bullfrogs disappeared. The reason was not indiscriminate capture, but natural selection caused by inbreeding.

The story of the bullfrogs illustrates the theory that the matrix of evolution is based on incompleteness.

Living things that pursue completeness prefer crossbreeding. Even primordial cells knew this. Instead of blocking germs that threatened to infiltrate them, the cells sought co-existence and co-prosperity with them. Today, the mitochondria in our somatic cells provides evidence of this phenomena. Even if we humans do not consciously choose crossbreeding, our instinct for it is certainly in our DNA.

The same principle applies to education, where academic inbreeding decreases competitiveness for both students and schools. Educational institutions that succumb to this problem fail to keep up with current trends, which is why Ivy League universities in the United States often hire from outside their ranks.

If universities insist on employing their graduates as professors, they will be acceding to a predetermined fate dictated by natural selection and will have only themselves to blame.