South Korean and U.S. Marines, above, re-enacted the Incheon landing yesterday. The re-enactment marked the 60th anniversary of the U.S.-led United Nations troops’ Incheon Landing Operations (seen in the right) against North Korea during the 1950-1953 Korean War.

The historic event turned the tide in the three-year war with North Korea. Some 14,000 people, including Korean War veterans from nine countries, commemorated the Incheon Landing, a daring amphibious operation led by U.S. Gen. Douglas MacArthur on Sept. 15, 1950. The landing, made less than three months into the conflict, helped change the course of the 1950-1953 Korean War. Two weeks later Seoul, South Korea’s capital, was liberated from North Korean invaders.

Some 2,000 Korean War veterans from South Korea and foreign nations, including the United States, Britain, France and Australia attended the ceremony in the city of Incheon, west of Seoul, according to Korea’s Ministry of National Defense. The nations fought on South Korea’s side as part of the 16-member U.N. forces. 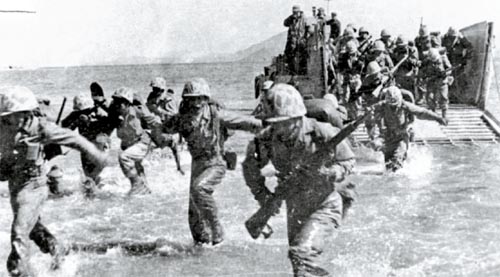 As part of the ceremony, a reenactment of the battle was staged near Wolmi Island off Incheon with 12 ships, 16 aircraft and some 200 marines from South Korea, the U.S. and Australia taking part, officials said.

The 30-minute re-creation included a mock landing, marine reconnaissance diving and a flyby of helicopters and aircraft, the ministry said.

South Korea has re-enacted the battle every year since 2008, but this year’s re-enactment was the largest in terms of size in order to mark the 60th anniversary of the outbreak of the Korean War, officials said.

On Tuesday, North Korea slammed the replay of the 1950 landing, calling it a “crime committed with aims to bring down the Korean people.”

In a commentary, the North’s official newspaper Rodong Shinmun said the re-enactment is “a provocation to the DPRK [North Korea], and the revelation of their ambition for invasion of [North Korea] that remains unchanged.”