A big win for Seongnam Ilhwa

A big win for Seongnam Ilhwa 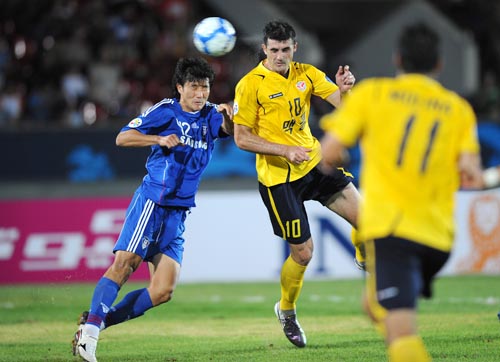 
Seongnam Ilhwa is in good shape to reach the Asian Football Confederation Champions League semifinals after trouncing the Suwon Bluewings 4-1 in the quarterfinals first-leg matchup Wednesday night at the Tancheon Sports Complex in Seongnam, Gyeonggi.

Four K-League clubs managed to advance to the quarterfinals but Seongnam Ilhwa was the only club to win Wednesday.

Suwon, which struggled early on in the season, had been on an impressive run since June when Yoon Sung-hyo was named the club’s new manager.

With the two sides playing to a scoreless draw in their last K-League match earlier this month and with horrid field conditions still not improved, many were bracing for another tightly contested low-scoring affair.

It turned out to be a lopsided match as Seongnam’s Macedonian forward Dzenan Radoncic opened the scoring just eight minutes into the game.

Suwon’s Yeom Ki-hun managed to level the game in the 17th minute but that’s as close Suwon ever came to challenging Seongnam. Colombian Mauricio Molina scored the go-ahead goal in the 33rd minute and Randoncic padded the lead with his second goal in the 66th minute to give Seongnam a comfortable two-goal lead. Yang Sang-min’s goal in the 82nd minute made the game 4-1.

“We played a good game today,” said Radoncic at a post-match press conference. “I feel good about contributing to the team’s 4-1 win.

“It’s not over yet, we still have to play the second-leg match in Suwon.”

Having made his K-League debut with the Incheon United in 2004, Randoncic has now spent seven years in Korea and is having a strong season with nine goals and four assists. The 27-year-old said he wanted to help the lagging Korean national team offense if given the chance.

“Having lived in Korea for a long time, I still have thoughts about becoming a naturalized citizen,” Radoncic said. “I’m trying my best to showcase my skill set. I think it would be great if I can play for the national team of my second home.”

Although the second-leg will be played at Suwon World Cup Stadium next Wednesday, the Bluewings now have a monumental task at hand as they have to overcome a three-goal deficit in their next match.

“I need to be held accountable for the loss today,” said an agitated Yoon before criticizing the poor field conditions.

Said Yoon of the playing conditions: “Even amateur players do not play on such surfaces these days. Who would come to watch football played on such a field?

“If we had played on a proper field, we could overcome the three goal deficit without any problems.”

The Steelers looked to be in good shape to end the game on a tie but Jung Hong-young’s foul on Igor Castro in the penalty box led to a Mahdi Rajabzadeh penalty-kick goal in the 75th minute.

Pohang needs to win their second-leg match at home 1-0 or by a two-goal differential in order to advance to the semifinals.

Fahad Hamad opened the scoring for the visitors in the 68th minute and Ahmed Ateef added another in stoppage time to pad their lead.

“Our plan had been to take an early lead off a set-piece play. We failed to play to our strengths today,” said Jeonbuk manager Choi Kang-hee. “We put ourselves in a tough situation by allowing a late goal in stoppage time. We might have placed ourselves on the edge of a cliff with our performance tonight but we will work to have a confident group ready for the next match.”