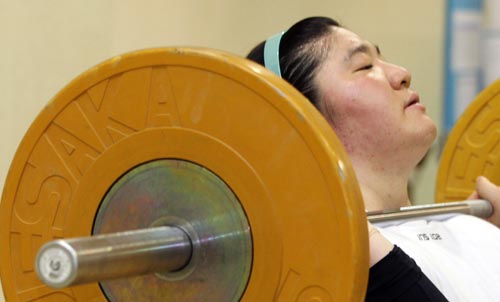 
Weightlifting is a solitary pursuit.

Coaches can pat you on the back and give you all the pep talk they want behind the stage, but once you’re on it, you are all alone with the barbell.

Casually dressed in a white T-shirt and black shorts, Jang started with a light routine and lifted her barbell - with 15 kilograms (33 pounds) of weight on each end - up to her waist, then brought it down for a few minutes.

Later, her coach joined in as Jang began raising the barbell - now with an extra 10 kilograms on both ends - above her head. The heavier the barbell got, the more beads of sweat formed on her forehead, and each grunt grew louder than the last.

At first glance, weightlifting appears to be about brute strength. But that isn’t necessarily the case, Jang said.

“You need strength, the right posture, flexibility and agility to lift more than your own weight,” the 27-year-old said, taking a breather from her practice at the National Training Center.

“Even the little movements of your fingers and toes could have a huge impact on the outcome,” she said.

It may be the greatest injustice in weightlifting that Jang hasn’t won an Asiad gold. She has won two silvers, and at 27, this may be her last shot.

As part of her preparation, Jang was scheduled to depart for Turkey yesterday for the annual world championships, which begin tomorrow.

“It’d be nice to win both, but it’s not something you can pull off just because you have the desire,” she said. “We have to wait for four years to compete at the Asian Games, and it’s tough for all athletes to try to win both [in the same year].”

In the over-75-kilogram class, the heaviest female division, Jang has virtually nothing left to prove. Her place in the annals of the sport is quite secure.

In winning the gold at the 2008 Beijing Olympics, Jang set world records in snatch with 140 kilograms, in the clean and jerk with 186 kilograms and in total weight with 326 kilograms. The silver medal winner, Olha Korobka of Ukraine, managed just 277 kilograms total.

The women’s event was added to the world championships in 1987, and their heaviest weight class was adjusted from over-83 kilograms to over-75 kilograms in 1998.

Jang is the only lifter with more than one gold medal in her category.

Despite her success, Jang confessed that each tournament is always difficult. Still, that doesn’t mean she feels any more pressure to repeat as the world champ.

“I am entering the world championships with the mindset that I’d like to prepare and train the best I can and challenge my best records,” she said. “Since I am not yet at 100 percent, I am happy with just having a shot at winning my fifth straight world title. I am focused on trying to do my best.”

Jang is not in her best shape because she still is dealing with the aftereffects of a minor auto accident in January. A van rear-ended Jang’s sedan, and she has been battling nagging back and shoulder pains ever since.

“It’s unfortunate that I haven’t been able to prepare the way I usually do for tournaments,” she said. “In training and competitions, there are always ups and downs. I will keep reminding myself of the good times.”

Jang said she picked up other minor injuries while getting treated for pain from the accident, but said injuries are always a part of weightlifting.

“Every athlete deals with injuries and it’s up to the individual to handle them,” she said. “It’s my fault that I got hurt before the competition.”