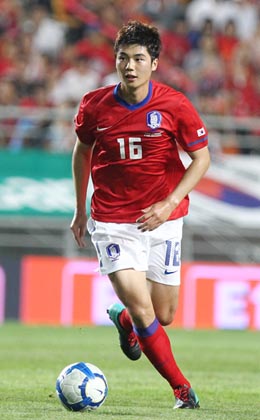 With the Asian Games and the Asian Cup nearing, respective managers are cooperating in an attempt to allow midfielder Ki Sung-yueng to participate in both events.

National team manager Cho Kwang-rae met with Asian Games manager Hong Myung-bo at the National Football Center in Paju, Gyeonggi, on Wednesday and came to an agreement to allow Ki to compete at the 2010 Guangzhou Asian Games in November.

“We will consult with Ki’s pro club Celtic in an effort to have Ki participate at the Asian Cup as well,” Cho said. “We decided to cooperate on the basis that if Ki wins a gold at the Asian Games, he can be exempted from his mandatory military service.

“I think the Asian Cup will be good experience for Ki and don’t expect the Celtic officials to prevent Ki from entering the tourney.”

Cho has already contacted Korea Football Association officials and Ki’s agent in regard to the 21-year-old’s availability for the Asian Cup in Qatar in January.

Cho is expected to fly out to Scotland sometime after an Oct. 12 friendly match against Japan to meet with Celtic officials regarding the matter.

Hong, whose final 20-man roster for the Asian Games has been delayed, is expected to make squad announcements today.

Making up the core of the squad are key players from the 2009 Egypt U-20 World Cup squad. The U-20 members made an impressive run to the quarterfinals and Hong was promoted to manage the Olympic and Asian Games teams after leading the young men to the impressive showing.

The biggest decision remaining for Hong at the moment are the three wildcard players or players over the age of 23 allowed per team. Forward Park Chu-young of AS Monaco will not participate in the event because he has not been able to gain permission from his club. Cho Yong-hyung, a versatile defender who can also play defensive midfield positions, has gained permission from his Qatari club Al-Rayyan to compete in the event.