‘Despicable Me’ is cool looking but slight

‘Despicable Me’ is cool looking but slight 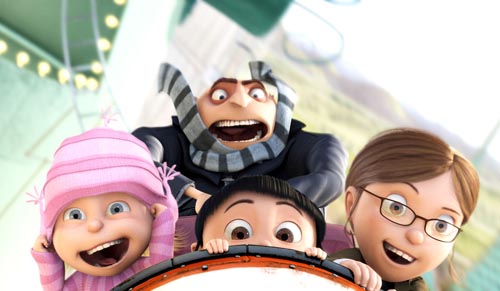 An action scene from ‘Despicable Me’ is shown here. Provided by UPI Korea


Despite some clever moments and colorful characters, “Despicable Me” should be called “Forgettable Me” instead.

It has a pleasingly off-kilter look about it - the work of a French animation house - a strong voice cast led by Steve Carell as the bumbling bad guy Gru and a delightfully cruel sense of humor. It’s actually darker and odder than most family-friendly animated fare, and that’s a good thing - until it goes predictably soft and gooey at the end, that is.

But what’s mainly missing from this first animated 3-D offering from Universal is story. There’s just nothing to Despicable Me, and that becomes glaringly obvious when you compare it to “Toy Story 3” in particular and Pixar movies in general, where story is paramount.

Here, the look of the film is what makes it stand out amid the glut of summer cartoons. The characters are cute in their weirdness, down to Gru’s shaggy, growling dog. Even the trio of spunky orphans crucial to Gru’s latest diabolical plan - Margo (Miranda Cosgrove), Edith (Dana Gaier) and Agnes (Elsie Fisher) - are adorable in an unusual way.

The scene-stealers, though, are the Minions: tiny, yellow, pill-shaped creatures with one eye - sometimes two - that carry out Gru’s evil deeds. At least, they try. But they’re also super-cute: bouncing around, reveling in mischief and babbling to each other in their own gibberish. If Despicable Me had come out closer to Christmas, Minions probably would have made great stocking stuffers.

The movie starts out promisingly enough, though. Directed by Pierre Coffin and Chris Renaud and written by Ken Daurio and Cinco Paul (from a story by Sergio Pablos), it moves along breezily with slapstick energy and a multitude of sight gags.

The heavyset Gru, with his hunched carriage, indeterminate Eastern European accent and environmentally unfriendly vehicle, hatches a plan to steal the moon. Who cares that doing so will throw Earth out of whack? He figures this is the best way to compete with Vector (Jason Segel), a hyperactive, up-and-coming villain whose retro-cool lair resembles a boutique hotel.

But Vector has the shrink ray Gru needs to zap the moon down to a manageable size, so he adopts the trio of plucky young orphans and sends them into the house under the guise of selling cookies as a means of gaining access.

Despicable Me throws everything it’s got at us - sometimes literally. The 3-D gimmick of flinging stuff at the audience gets played up for knowing laughs here, especially during the closing credits. Kids will dig it, adults will smile with amusement, and no one will be any different afterward than when they walked into the theater.